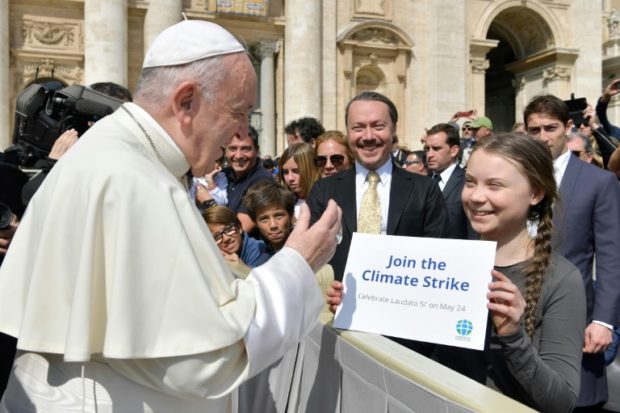 In his annual speech to Vatican diplomats, the pontiff said climate change was a “concern of everyone,” despite a tepid response from the international community.

“Many young people have become active in calling the attention of political leaders to the issue of climate change. Care for our common home ought to be a concern of everyone,” he said.

“Sadly, the urgency of this ecological conversion seems not to have been grasped by international politics, where the response to the problems raised by global issues such as climate change remains very weak and a source of grave concern,” he added.

Since his papacy began in 2013, the Argentine pontiff has often argued for better protection of the environment. In April, he met teenage climate activist Greta Thunberg, who launched the Fridays for Future youth moment against climate change.

That movement has seen millions of people go on strike or spill into the streets demanding climate action.

Around the world, governments faced with a crescendo of deadly weather and dire alarms from science have failed to signal a real determination to act.

Pope Francis said the UN conference in Madrid in December – widely considered to have been a flop – raised “serious concern about the will of the international community to confront with wisdom and effectiveness the phenomenon of global warming”.

He prayed for those affected by devastating fires in Australia and other areas of Oceania.