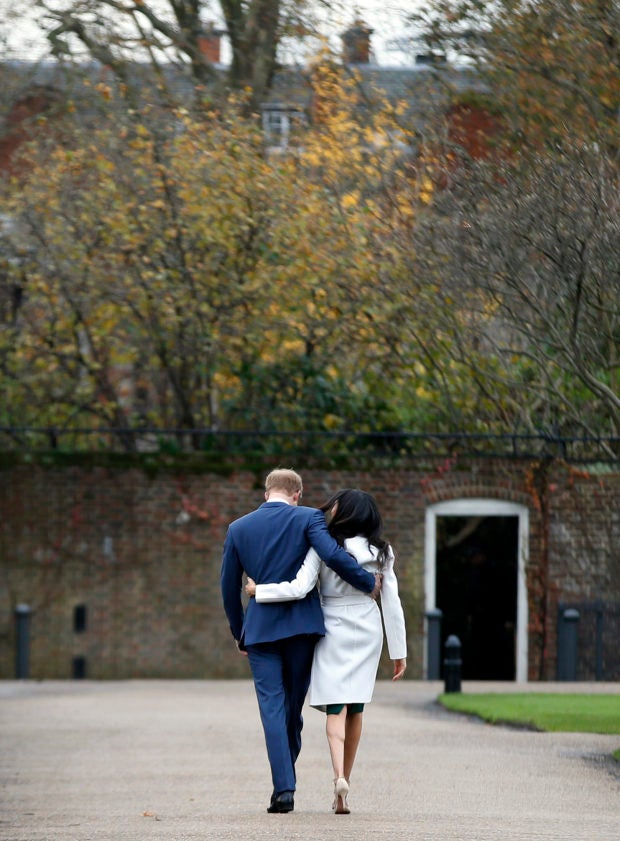 In this Monday, Nov. 27, 2017, file photo Britain’s Prince Harry and Meghan Markle walk away after posing for the media in the grounds of Kensington Palace in London. In a stunning declaration, Britain’s Prince Harry and his wife, Meghan, said they are planning “to step back” as senior members of the royal family and “work to become financially independent.” A statement issued by the couple Wednesday, Jan. 8, 2020 also said they intend to “balance” their time between the U.K. and North America. (AP Photo/Alastair Grant, File)

Britain’s royal family scrambled Thursday to contain the fallout from the surprise announcement by Prince Harry and Meghan that they plan “to step back” from royal duties and pursue a new path that will allow them to be financially independent.

The couple’s announcement that they planned to forge a “progressive” new path for royals in the modern world clearly upset senior royals — who apparently weren’t told of the decision in advance. Hours after Harry and Meghan’s announcement, Buckingham Palace issued a second statement, saying many issues still had to be worked out before the couple’s plan could be realized.

A statement issued Wednesday evening by Buckingham Palace, described as “a personal message from the Duke and Duchess of Sussex,” said Harry and Meghan intend to become financially independent and to “balance” their time between the U.K. and North America.

“After many months of reflection and internal discussions, we have chosen to make a transition this year in starting to carve out a progressive new role within this institution,” the statement said. “We intend to step back as ‘senior’ members of the royal family and work to become financially independent while continuing to fully support her majesty the queen.”

The rift dominated Britain’s media, which reported that Queen Elizabeth II had not been informed of the decision. The Sun described the departure as “Megxit” — a play on Brexit, Britain’s departure from the European Union. The term was also adopted by the New York Post, another title owned by Rupert Murdoch — which featured a cover cartoon drawing of the duchess holding a cigarette while Harry cradles a beer in front of a television.

The 35-year-old Harry is Elizabeth’s grandson and sixth in line to the British throne. With his ginger hair and beard, he is one of the royal family’s most recognizable and popular members and has spent his entire life in the glare of the public eye.

Before marrying the prince in a royal wedding watched around the world in 2018, the 38-year-old Duchess of Sussex was American actress Meghan Markle, star of the TV legal drama “Suits.” The couple’s first child, Archie, was born in May 2019.

The message about their future plans was also posted on the couple’s official Instagram page and referred readers to a website, sussexroyal.com, for information.

The statement and launching of the website were apparently not cleared with senior royals or their advisers.

Buckingham Palace’s later communique hinted that Harry and Meghan’s statement had caught the royal household by surprise. The palace statement said discussions with the Duke and Duchess of Sussex were “at an early stage.”

“We understand their desire to take a different approach, but these are complicated issues that will take time to work through,” it read. 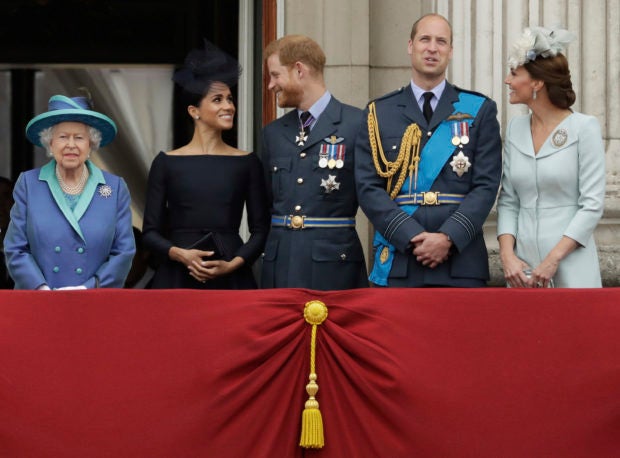 In this Tuesday, July 10, 2018, file photo Britain’s Queen Elizabeth II, and from left, Meghan the Duchess of Sussex, Prince Harry, Prince William and Kate the Duchess of Cambridge watch a flypast of Royal Air Force aircraft pass over Buckingham Palace in London. In a stunning declaration, Britain’s Prince Harry and his wife, Meghan, said they are planning “to step back” as senior members of the royal family and “work to become financially independent.” A statement issued by the couple Wednesday, Jan. 8, 2020 also said they intend to “balance” their time between the U.K. and North America. (AP Photo/Matt Dunham, File)

It was not known exactly where in the Americas the couple plan to spend their time. Meghan grew up in Los Angeles and lived in Toronto while filming “Suits.” Harry and his family skipped the queen’s traditional Christmas gathering at her Sandringham estate last month to spend the holidays on Vancouver Island off the west coast of Canada and see Markle’s mother Doria, who lives in California.

The royal pair described their new roles on their new website. The site noted that the Sovereign Grant, which funds the monarchy, covers just 5% of the costs for the duke and duchess and is used for their official office expenses but they want to cut this financial tie.

The couple also announced a new media relations policy “to ensure diverse and open access to their work.” The policy includes opting out of a pool system that guarantees media coverage of royal events to Britain’s media.

“Under this system, the rota, or pool, gives these British media representatives the opportunity to exclusively cover an event, on the understanding that they will share factual material obtained with other members of their sector who request it,” the website said. “The current system predates the dramatic transformation of news reporting in the digital age.”

As an actress and a human rights activist, the duchess was accustomed to media attention before her marriage, but she has made no secret of the fact that the transition to being a global celebrity and part of Britain’s royal family was difficult. The royal couple particularly took issue with their treatment at the hands of the British tabloids, whose aggressive coverage of all things royal is legendary.

The royal couple revealed their struggles with the media during an ITV documentary “Harry & Meghan: An African Journey,” which followed them on a recent tour of Southern Africa. Both said they had struggled with the spotlight, particularly because they say much of what is printed is untrue.

The duchess told ITV last year that her British friends warned her not to marry the prince because of the intense media scrutiny that would follow in his country. But the U.S. television star said she “naively” dismissed the warnings because as an American she didn’t understand how the British press worked.

“I never thought this would be easy, but I thought it would be fair. And that is the part that is hard to reconcile,” she said. “But (I) just take each day as it comes.”

The duchess said the pressure was aggravated by the fact that she went quickly from being a newlywed to being pregnant and then a new mother.

The British media have also made much of an alleged split between Harry and his older brother, Prince William, who is second in line to the throne. Harry and Meghan last year opted out of living at Kensington Palace in London, where William and his family lives, and moved to a Frogmore Cottage at Windsor.

In the ITV interview, Harry acknowledged there have been some differences between him and the 37-year-old William, although he said most of what has been printed about a rift between the two brothers has been “created out of nothing.”