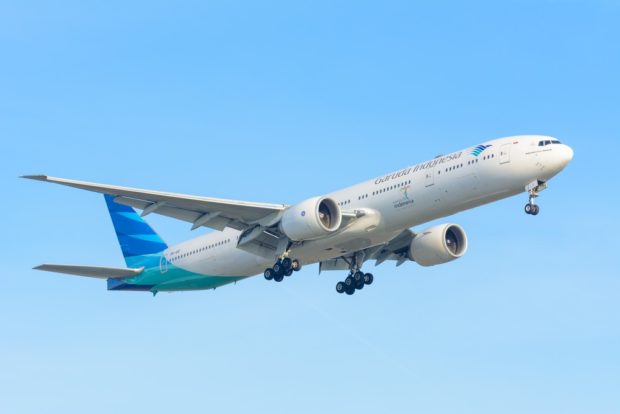 Garuda Indonesia’s PK-GIC Boeing 777-300 aircraft prepares to land at Amsterdam Airport Schiphol in the Netherlands in this 2016 photo. (Shutterstock.com/Nieuwland) via The Jakarta Post

JAKARTA — National flag carrier Garuda Indonesia has decided to divert its European routes from Middle East airspace to ensure the safety of all flights passing the region, following a retaliatory air strike on United States assets in Iraq ordered by Iran on Tuesday.

The airline’s acting director of operations, Tumpal M. Hutapea, said Garuda would divert the routes from Iranian and Bucharest airspace to northwest Egypt and Greece after a flight ban issued by the United States Federal Aviation Authority (FAA).

“We will continue to monitor the situation and adjust routes accordingly,” Tumpal said, adding that all Garuda Indonesia flights to Europe were operating as normal with the rerouting.

Furthermore, the Transportation Ministry’s air transportation director general, Polana B. Pramesti, issued a letter on Wednesday as a warning to all Indonesian planes to stay on alert should they pass through Middle Eastern airspace, particularly over Iran, Iraq, as well as the Persian Gulf and Oman.

Airlines from other countries, including Singapore Airlines (SIA), have purportedly avoided the region for safety reasons.

“All SIA flight routes are being diverted from Iranian airspace,” Singapore Air said previously as quoted by Bloomberg.

Iranian military forces reportedly launched a ballistic missile attack on a US-affiliated airbase in Ayn al-Asad, more than a 1,000 kilometers southwest of Tehran, the Iranian capital.

The attack is considered an act of revenge against Washington’s assassination of top Iranian general Qassem Soleimani last week in Iraq.