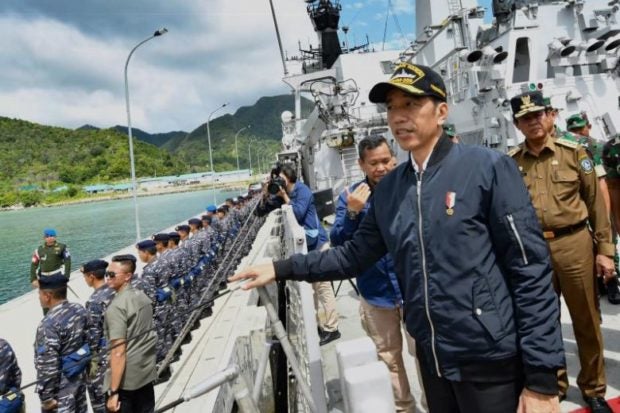 A handout photo taken and released on Jan 8, 2020 by the Presidential Palace shows Indonesian President Joko Widodo during his visit to a military base in the Natuna islands, which border the South China Sea. PHOTO: AFP

JAKARTA — President Joko Widodo flew to the Natuna Islands amid a stand-off between Indonesian warships and Chinese coast guard vessels and fishing boats in the rich fishing grounds between Malaysia and Borneo.

His fourth visit to the regency, which has around 81,000 inhabitants and is part of Riau Islands province, came just two days after the President asserted that Indonesia’s territorial integrity was “non-negotiable”.

The Indonesian government had earlier summoned the Chinese ambassador in Jakarta to deliver a diplomatic note protesting against Chinese encroachment into Indonesia’s exclusive economic zone (EEZ).

This followed the discovery of two Chinese coast guard vessels, along with around 60 Chinese fishing boats, in Indonesia’s EEZ near the Natuna Sea on Dec 19 and 24.

Shortly after his arrival in the Natunas, Mr Joko, better known as Jokowi, visited the newly opened Selat Lampa Integrated Maritime and Fisheries Center, which began operating last October. It is equipped with a dock and an integrated cold storage, among other things.

Addressing hundreds of fishermen, Mr Joko reiterated that Indonesia would not bargain on sovereignty over its territory, including the Natuna Islands.

“I am coming here to ensure law enforcement pertaining to our sovereign rights over marine natural resources in the EEZ. The navy and the Maritime Security Agency are here to guarantee that the laws are enforced,” he was quoted as saying by the state secretariat in a statement.

The President also noted that although foreign vessels may enter the EEZ, they could not exploit the resources in the area and any violations would be subject to Indonesian laws.

Indonesia has been stepping up efforts against intrusions of the Chinese fleet since last week.

The military has deployed six warships, one maritime patrol aircraft and one surveillance aircraft to monitor the situation. The Maritime Security Agency has also deployed two patrol vessels for the same purpose in the Natunas.

Despite the heightened Indonesian presence, however, two Chinese coast guard vessels and five fishing boats were observed remaining within the 320km EEZ in the Natunas this week.

Over the past three years, Chinese naval vessels have repeatedly entered waters around the islands, with Beijing claiming part of the sea as its “traditional fishing grounds”.

In the previous instance of a major intrusion in 2016, the Indonesian President led a Cabinet meeting on a warship in the waters off the Natuna Islands.

Jakarta has also renamed an area close to the contested South China Sea as North Natuna Sea – a move that largely irked Beijing.

Indonesia is not a party to the dispute in the South China Sea, where Beijing’s claim to the vast waterway has encroached on those of Brunei, Malaysia, the Philippines, Taiwan and Vietnam.

Separately, without referring to China and its claims over the South China Sea, Indonesia’s Foreign Minister Retno Marsudi yesterday reiterated that her government rejected claims that were incompatible with and not recognised by international laws. She also said that Jakarta was committed to developing the country’s outer islands, including the Natunas, in the future.