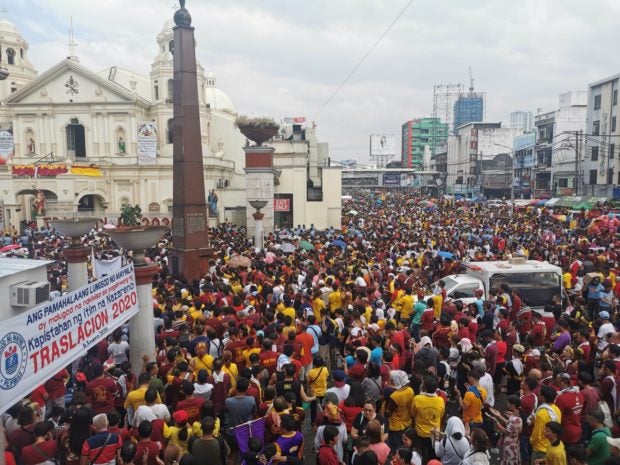 A SEA OF BELIEVERS Devotees flock to Quiapo Church for the annual Feast of the Black Nazarene on Thursday, January 9, 2020. Image: Katrina Hallare/INQUIRER.net

MANILA, Philippines — Different strokes for different folks. And for these three individuals, no amount of distance, heat, and pandemonium could stop them from showing their faith and embark on their annual panata to the Black Nazarene.

In the last six years, 26-year-old Buloy Husayan has been a regular at Traslacion appealing to high heavens for a baby.

“Pang-pitong taon ko na ito, pero nasanay na rin katawan ko (This is my seventh year, but my body is already used to it),” Husayan said of how he manages to be an early riser during the day of the grand procession – a major religious event for Filipino Catholics.

(Because my wife and I have been together for 10 years and we still have no child. I am praying each year that I will be included in the Black Nazarene procession, that we are given God’s blessings.) 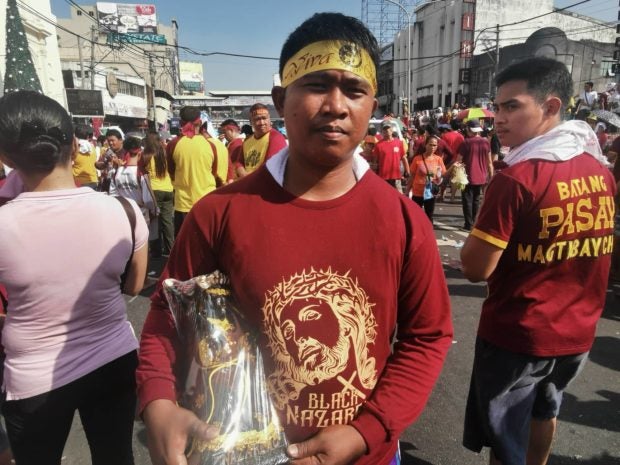 PRAYING FOR A CHILD Buloy Husayan, 26, says he has been praying for a miracle that the Black Nazarene would finally give him – and his partner for 10 years now – a child. On Thursday, January 9, 2020, Husayan joins the Traslacion for the seventh year. Katrina Hallare/INQUIRER.net

Despite years of still unanswered prayer, Husayan remains unfazed. He said he would continue his pledge for as long as he has the strength to go along with the sea of devotees who all want to touch the Black Nazarene image and have a piece of the miracle.

(As long as I’m still strong and I can still go up the carriage.)

Her father’s influence, meanwhile, has impelled Sakura Pascal to make sure that she turns up early every January 9 to join other family members in a pilgrimage, along with their replica of the Black Nazarene, to manifest their devotion.

On Thursday, the 14-year-old walked three hours from Balintawak in Quezon City to Quiapo Church in Manila.

She had no special prayers, but she said the Traslacion has fascinated her since 2016. 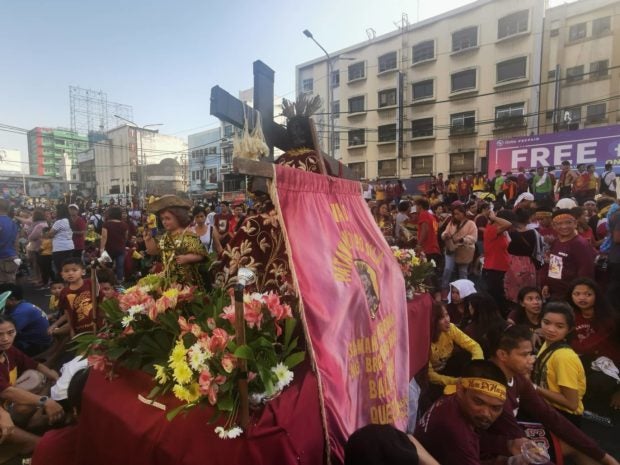 This photo shows the Black Nazarene replica brought by Sakura Pascal, 14, and her family. Pascal says she and her family members walked three hours all the way from Balintawak in Quezon City just to get to Quiapo Church in Manila on Thursday, January 09, 2020. Katrina Hallare/INQUIRER.net

(We walked for three hours. We started our journey at 3 a.m.)

But for Rolando Francisco Jr., 30, neither influence nor faith originally pushed him to join the Traslacion.

It’s his fourth time to attend the huge religious gathering this year, but he started his tradition out of curiosity about the Black Nazarene.

(During my first year, I had a hard time to hold on to the rope, and climb up the carriage.)

The struggle and pain that come with joining Traslacion didn’t matter, according to him.

“Ang pinakaimportante lang ay ‘yung sumamba ka, manalig ka. (The most important thing is that you pray, believe),” he added. 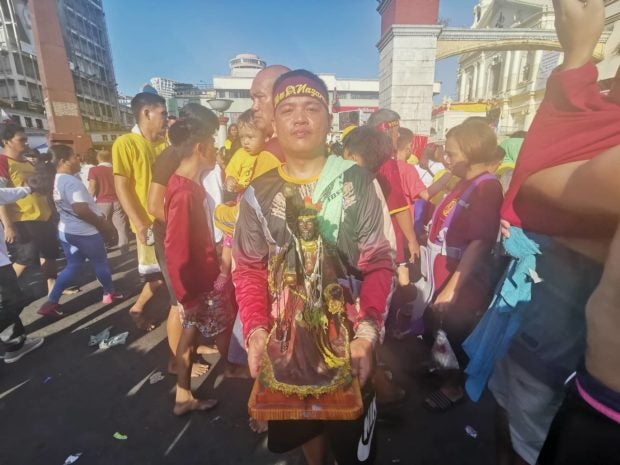 Rolando Francisco Jr., 30, travels all the way from his hometown of Norzagaray, Bulacan, on Thursday, January 9, 2020, just so he could join the yearly Traslacion of the Black Nazarene. Katrina Hallare/INQUIRER.net

He then revealed that he brought a replica of the Black Nazarene for the first time this year.