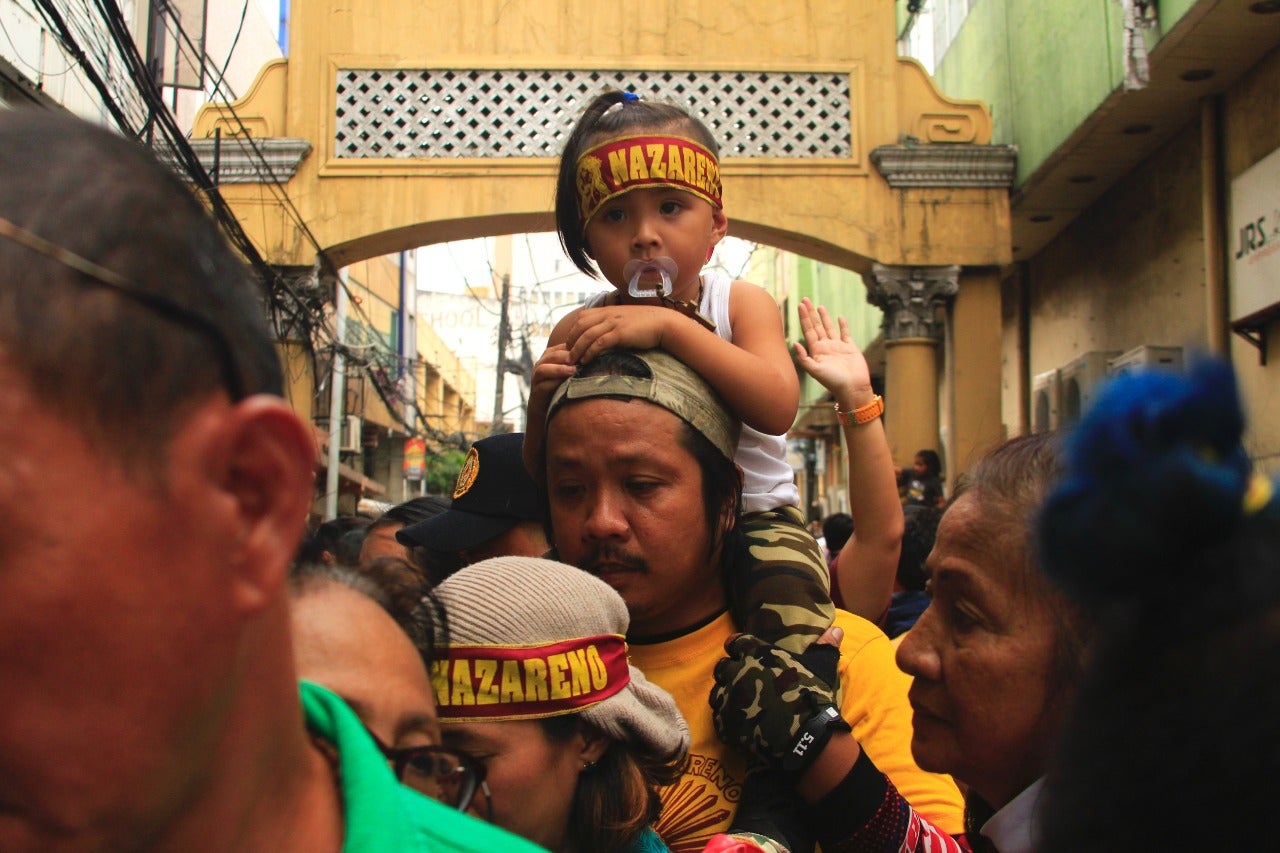 Children ride on their fathers’ backs while navigating the crowded streets of Quiapo during the Feast of the Black Nazarene. Parents bringing their children to the festivities are not new, despite repeated warnings from authorities. (Photo by Gabriel Pabico Lalu/ INQUIRER.net)

MANILA, Philippines – Devotees of the Black Nazarene have insisted on bringing their young children with them as they join the annual Traslacion or procession of the icon despite stern warnings from authorities.

Two of the devotees — a couple who identified themselves as Nisa and Manny — told INQUIRER.net that they see no problem bringing their two-month-old baby to the procession, saying they did not have problems during previous processions which were attended by their young daughter.

“Hindi naman, wala naman ‘yan, Traslacion eh, para sa Poong Nazareno,” Nisa said when asked if she is not worried that their young daughter will catch a disease during the procession.

(Not really, it won’t affect my daughter because it is the Traslacion, it is for the Black Nazarene.)

Manny meanwhile said that it is their way of passing their devotion to the next generation. 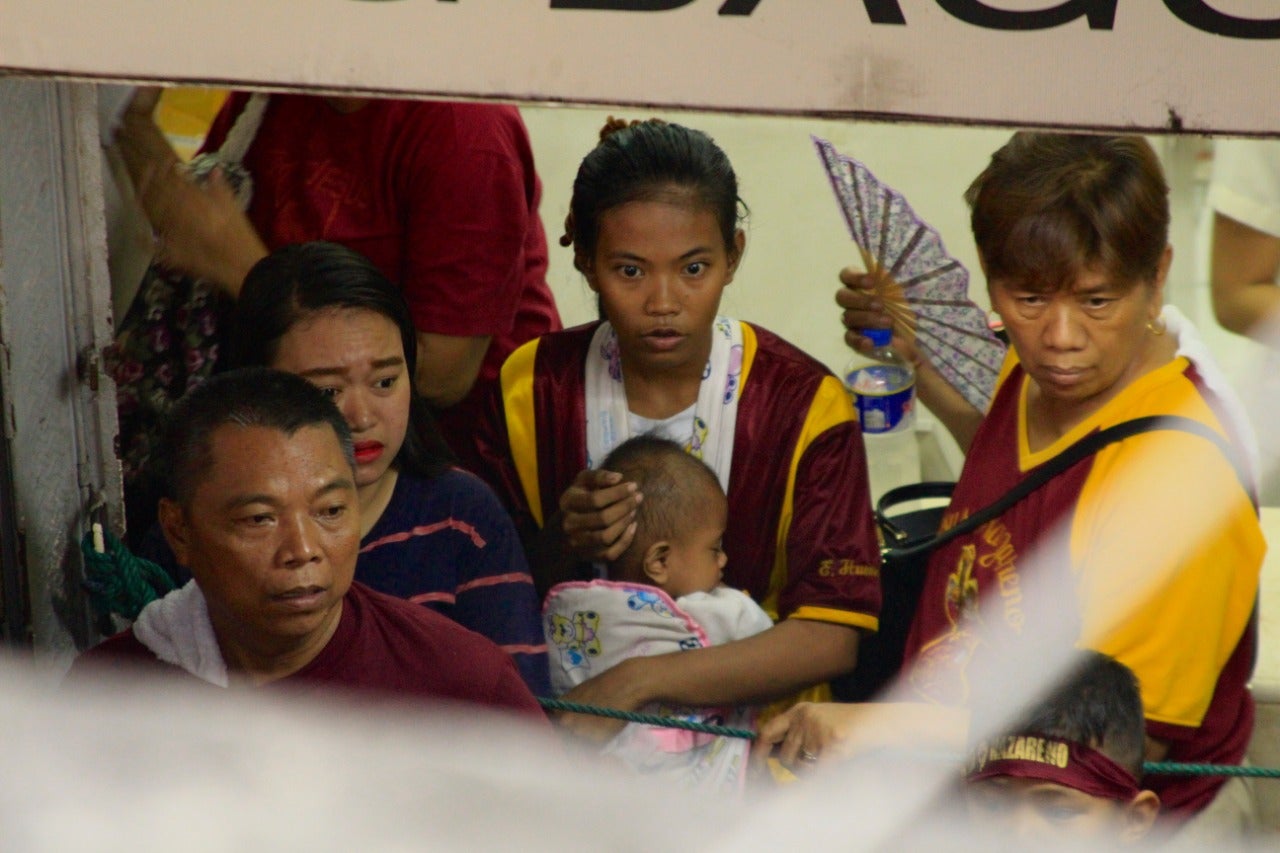 Elders try to freshen up a baby who was brought by her guardians to the Feast of the Black Nazarene in Quiapo. They sought refuge in a drugstore near Quiapo Church, as Mass-goers who area leaving the church start pushing. (Photo by Gabriel Pabico Lalu/ INQUIRER.net)

(It is better for me to bring my children so that they get accustomed to the devotion so that they also become devotees when they grow up. When my eldest was still a baby, I also brought her here, and nothing bad ever happened.)

Another group sitting at the foot of the Quezon Bridge — an area that the andas or the carriage bearing the image of the Black Nazarene will be passing through — said they do not mind if they bring along children with them.

The group brought with them a  7-month-old and a 2-year-old girl.

(No need for being delicate. That’s okay because it is part of our devotion, this sacrifice is for the Lord.)

(We only bring them here during the feast in Quiapo. Our parents also did the same thing, but we did not catch any sickness or ailment.)

Earlier, the Philippine National Police and the Department of Health (DOH) cautioned devotees against bringing young children with them to the Traslacion to avoid getting sick or being injured.

The Traslacion is a yearly Roman Catholic event in the Philippines, where a revered icon of the Black Nazarene from Mexico is taken on a procession from the Quirino Grandstand through various streets in Manila, as it makes its way back to the Quiapo Church.

The procession often takes more than 20 hours, but police are looking to shorten the duration this year. For the early part, they have been successful, as the andas or the carriage bearing the icon has already moved through difficult areas.

Read Next
Palace asks water firms: What do you need loans for?
EDITORS' PICK
Beyond the Chocolate Hills: A farm-to-table, heritage culinary adventure of Bohol
A massive highway complex makes living in the South highly attractive
Guarding Sara: Why next VP is getting own security team
House energy committee chair Arroyo bats for cheap electricity
WHO says monkeypox is not yet a health emergency
Metro Manila logged most number of new COVID-19 cases — OCTA Research
MOST READ
Leon Barretto steps up for sisters, asks dad Dennis Padilla: ‘Please stop resorting to public shaming’
LOOK: Rita Daniela pregnant with first child
Marjorie Barretto to speak up on Dennis Padilla, kids’ relationship ‘in time’
Bea Alonzo, under lie detector test, says she wants prenup agreement with future husband
Don't miss out on the latest news and information.