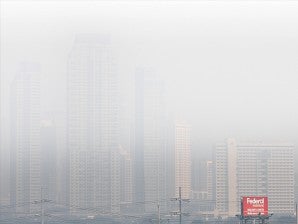 THE MORNING AFTER Thick smog triggered by the fireworks and firecracker explosions during the New Year celebration obscures the Makati City skyline on the first day of 2012. The smog prompted airport authorities to cancel several flights on Sunday morning. GRIG C. MONTEGRANDE

Airport officials had to cancel and divert planes landing at Ninoy Aquino International Airport (Naia) complex to the Clark airport in Pampanga because of poor visibility—at 6 a.m. zero visibility at Naia—from the smog that covered the metropolis.

Metro Manila residents on Sunday woke up—some of them coughing and sneezing—to a city enveloped by dense, dirty and toxic air from the New Year’s Eve revelry of firecracker explosions and smoke.

Data from the Department of Environment and Natural Resources (DENR) showed that the measurement of the total suspended particles (TSP) in the city’s air, which is unclean to begin with, went through the roof, thanks to the firecracker explosions that greeted 2012.

Environment Secretary Ramon Paje, who in the days leading up to New Year’s Eve had asked local government units to limit firecracker use during the celebrations, on Sunday renewed his call to ban firecrackers next year.

Paje explained that air pollution worsens during the yearend holidays because of the massive use of fireworks to welcome the new year.

“It has not only set back our efforts against air pollution, but also pose danger to life and limb. It also puts the airline industry into great risks, causing the diversion of today’s Naia flights to Clark,” he said.

Paje also warned that the air pollution could cause respiratory problems for Metro Manila residents.

“Air pollution is a health hazard. Our health department has been very vocal about it that it particularly impacts on our children and senior citizens because of their fragile health condition,” he warned earlier.

The maximum readings were recorded just before midnight and in the early hours of January 1, just when contaminants like sulfur, potassium and carbon particulates were settling over the city.

Sheen said the particulates in the air were similar to compounds used in gunpowder. He stressed that the amount of pollutants hovering above Metro Manila could cause respiratory ailments and increase the risk of lung cancer.

The highest TSP level at the Namria station, which is closest to the Naia, was recorded at 950 µg/Ncm between 4 and 5 a.m. of January 1.

The worst TSP reading at the Valenzuela station was registered at 886 µg/Ncm just before midnight.

The station located at the Ateneo de Manila University in Katipunan showed a maximum TSP reading of 992 µg/Ncm, taken between 3 and 4 a.m. of January 1.

By comparison, Metro Manila’s average TSP in the third quarter of 2011 was measured at 116 µg/Ncm. Although the pollution level has declined since 2010, the city’s air is still considered dirty. The World Health Organization’s standard of clean air is 90 µg/Ncm.

Sheen said the pollution level should be expected to normalize in a week, depending on the weather and winds. He noted that rains and strong winds would help dissipate the toxic gases in the air.

Traditionally, motor vehicles are the main source of pollution in the metropolis, accounting for as much as 80 percent of the pollution. The rest comes from industrial sources.