The Latest: Russian lawmaker warns of risk of nuclear war 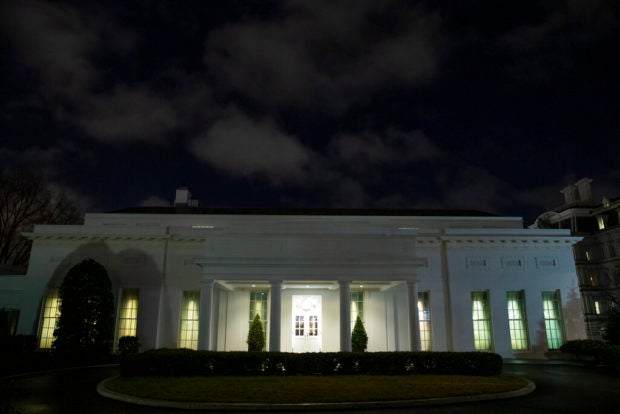 All the lights are on in the windows of the West Wing of the White House after news of a missile attack on an Iraqi air base housing U.S. troops, Tuesday, Jan. 7, 2020, in Washington. AP

TEHRAN, Iran (AP) — The latest on U.S.-Iran tensions after the U.S. airstrike that killed Iran’s top general (all times local):

A Russian lawmaker warns that a conflict between the U.S. and Iran might lead to a nuclear war.

The comments by Vladimir Dzhabarov, lawmaker with Russia’s upper house of parliament, on Wednesday followed an Iranian missile strike at military bases in Iraq used by U.S. forces. The strike was in retaliation for the U.S. killing Iran’s top military commander in Baghdad.

“Reciprocal strikes by the U.S. and Iran may lead to an all-out war in the region,” Dzhabarov said. “If Washington sees that it can’t achieve its goals, there’s a danger of a nuclear war.”

The Russian lawmaker said the U.N. Security Council should get involved to prevent further escalation in the Middle East.

Iraq’s military says it had no troop casualties in the Iranian strike, and President Donald Trump tweeted that”All is well!” as casualty and damage assessments are ongoing.

The Iraqi military says there are no casualties among its troops as a result of an Iranian missile strike at bases in Iraq used by U.S. forces.

The military said in a statement carried by the state news agency Wednesday that the attack lasted half an hour, starting at 1:45 a.m. local time.

The statement said 22 missiles were fired. Seventeen missiles hit al-Asad air base, including two that did not explode in the Hitan area west of the town of Hit. Five other missiles hit the northern region of Irbil.

The energy minister of the United Arab Emirates says he sees no immediate shortages in oil supplies, but that OPEC will be called in if there is an issue.

“The situation is not currently a war situation,” Suhail Al-Mazrouei told reporters Wednesday. “We are all hoping for deescalation. I think wisdom will prevail despite the tension.”

He spoke after an Iranian missile strike at military bases in Iraq used by U.S. forces. The strike was in retaliation for the U.S. killing an Iranian general in Baghdad.

He said even in past times of war, the flow of oil has been maintained.

“So let’s not exaggerate what’s happening. There is no risk that we have seen to the Strait of Hormuz or the movement of oil yet,” Al-Mazrouei said, referring to the narrow waterway between the Arabian Peninsula and Iran through which 20% of the world’s oil passes through.

He spoke reporters in Abu Dhabi at the Gulf Intelligence’s UAE Energy Forum.

Brent crude oil has jumped to around $70 a barrel amid heightened concerns over tensions between Iran and the United States.
___

Japan says it will urge governments to do their utmost to help ease tensions following an Iranian missile strike at bases in Iraq used by U.S. forces.

The strike came in retaliation for the killing of an Iranian general.

Japanese Chief Cabinet spokesman Yoshihide Suga said Wednesday that his “government will coordinate with the related governments to collect intelligence while we ensure the safety of Japanese citizens in the region.”

He added: “Japan will also urge all related nations to do their utmost diplomatic effort to improve the relations.”

He said Japan remained on track to soon deploy a warship to the Gulf to help safeguard Japanese vessels and oil tankers transiting the area.
___

Australian Prime Minister Scott Morrison says all of his country’s troops and diplomatic staff in Iraq are safe after Iran’s firing of missiles at two military bases there.

Around 300 Australian defense personnel are stationed in Iraq.

Morrison said he spoke with President Donald Trump about the situation between the U.S. and Iran on Tuesday during a call about the wildfires raging in Australia.

Sepaking to reporters Wednesday, Morrison said in reference to the killing of Revolutionary Guard Gen. Qassem Soleimani: “The United States have taken the action that they have to address what has been intelligence that they say that they received, which was putting their interests at risks and under threat.”
___

President Donald Trump says “All is well!” after more than a dozen Iranian missiles were fired at two bases housing U.S. troops in Iraq.

Trump tweets that casualty and damage assessments are ongoing but adds, “So far, so good!”

He says he will be making a statement on the strikes Wednesday morning.

Iranian state TV says the missile strikes were retaliation for the killing of Revolutionary Guard Gen. Qassem Soleimani, whose death last week in an American drone strike near Baghdad prompted angry calls to avenge his slaying.
__

Foreign Minister Mohammad Javad Zarif has also tweeted, “‘We do not seek escalation or war, but will defend ourselves against any aggression.”

His tweet follows the missile attack in retaliation for the killing of Iranian Revolutionary Guard Gen. Qassem Soleimani in a U.S. drone strike last week in Baghdad.
__

Iran has buried a top Revolutionary Guard general slain by U.S. airstrike in Baghdad after a stampede at his funeral killed 56 and Iran launched a ballistic missile attack on Iraqi bases housing American troops in response.

Officials lowered the shroud-wrapped remains of Qassem Soleimani into the ground in the southeastern city of Kerman just before 6 a.m. Wednesday.

Mourners at the grave site wailed.

The official spoke on condition of anonymity in advance of a Pentagon briefing.

The official says 15 missiles were fired. Ten struck the Ain al-Asad air base in Iraq’s western Anbar province. One struck a base in Irbil in Iraq’s semiautonomous Kurdish region. Four missiles failed to hit their targets.

The official says the bases are still being searched for casualties.

The Federal Aviation Administration is barring U.S. pilots and carriers from flying in areas of Iraqi, Iranian and some Persian Gulf airspace.

The agency is warning of the “potential for miscalculation or mis-identification” for civilian aircraft amid heightened tensions between the U.S. and Iran. The emergency flight restrictions follow ballistic missile strikes Tuesday on two Iraqi bases that house U.S. troops.

Such restrictions are often precautionary in nature to prevent civilian aircraft from being confused for ones engaged in armed conflict. The FAA says the restrictions are being issued due to “heightened military activities and increased political tensions in the Middle East, which present an inadvertent risk to U.S. civil aviation operations.”
__

Justin Goodman, a spokesman for Schumer, says the New York Democrat is closely monitoring the situation and is praying for the safety of service members and other personnel.

Pelosi spokesman Drew Hammill tweeted that the speaker returned a call from the vice president moments after presiding over the House.

Katie Waldman, a spokeswoman for the vice president, says Pence has been in continuous contact with national security officials and made calls to congressional leadership at President Donald Trump’s direction.
__

The Pentagon is confirming that Iran has launched “more than a dozen ballistic missiles” at two targets hosting against U.S. military and coalition forces in Iraq.

Defense Department spokesman Jonathan Hoffman says “It is clear that these missiles were launched from Iran.”

He says the attacks “targeted at least two Iraqi military bases” at Ain Assad and Irbil.

Iranian state TV says the attack was in revenge for the killing of Revolutionary Guard Gen. Qassem Soleimani, whose funeral Tuesday prompted angry calls to avenge his death.