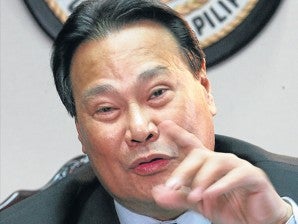 “There is no truth to the allegation that the University of Santo Tomas broke its rules to favor Chief Justice Renato Corona who graduated with the degree of Doctor of Laws from the University,” UST said in a statement. It added that Corona had enrolled in all of the requisite subjects leading to the doctorate, attended his classes, passed them and delivered a “scholarly treatise” for his dissertation in a public lecture.

UST said it had been declared by the Commission on Higher Education (CHEd) an “autonomous higher educational institution (HEI)” according to the following criteria: “long tradition of integrity and untarnished reputation, commitment to excellence, and sustainability and viability of operations.”

“As an autonomous university and no less than the cradle of higher education in the Philippines and the oldest university in Asia, the University of Santo Tomas knows academic rules and sees to their proper observance,” said UST, which is closing this month its yearlong quadricentenary celebration. It was founded by the Dominicans in 1611.

“As an autonomous HEI, the University of Santo Tomas enjoys an institutional academic freedom to set its standards of quality and excellence and determine to whom it shall confer appropriate degrees,” said UST.

Additionally, it said it had been deputized by CHEd to implement the Expanded Tertiary Education Equivalency and Accreditation Program (Eteeap). This means it can grant academic degrees to individuals “whose relevant work experiences, professional achievements and stature, as well as high-level, nonformal and informal training are deemed equivalent to the academic requirements for such degrees.”

It said CHEd had accepted UST’s policies and programs to implement the Eteeap when the UST Graduate School conferred a doctorate degree in literature on theater icon, Naty Crame Rogers, who was nominated for the National Artist award.

But Corona’s doctorate wasn’t part of the Eteeap, UST pointed out.

It said Corona had the track record as a lawyer, as an academician (he obtained two Master’s degrees, one from Harvard University) and as the Chief Justice of the Philippines, and could have easily qualified for the Eteeap.

“But he did not,” UST said. “He painstakingly completed the 48 units’ course work in the Ph.D. in Law curriculum by regularly attending classes and fulfilling all the requirements in the subjects that he took. He also underwent the required written comprehensive examination and passed this with excellent results.”

According to the statement, the UST consultant for graduate law programs had requested that the dissertation requirement be waived for Corona, but the UST Graduate School Faculty Council turned this down. “It imposed on the Chief Justice an equivalent requirement: to write a scholarly treatise on any subject related to his field, to be delivered in public and eventually published,” said UST.

“He dutifully fulfilled these in 2010. The quality and relevance of his paper, his answers to the questions raised during the public forum, and the eventual publication of his paper were all evaluated and for which he was given the necessary credits equivalent to a dissertation.

“Needless to say, since the university is an autonomous HEI, the other issues raised (his residency, the academic honor he received) are moot because these come under the institutional academic freedom of the University of Santo Tomas,” the UST statement said.

UST said it did not reply to Marites Vitug’s query because it was at a loss on how to respond to “online journalism.” It added that Vitug should have made the proper disclosure that she has had a run-in with Corona and the Supreme Court that may cast some reservation about the objectivity of her article.

“Does anyone claiming to be an online journalist given the same attention as one coming from the mainstream press?” the statement said. “We understand that while Miss Vitug used to be a print journalist, she’s part of an online magazine, Newsbreak, which has reportedly been subsumed into ‘www.rappler.com.’ What’s that?

“Is that a legitimate news organization? What individuals and entities fund Newsbreak and Rappler? Do these outfits have editors? Who challenged Miss Vitug’s article before it went online so as to establish its accuracy, objectivity and fairness? Why was there no prior disclosure made? What gate-keeping measures does online journalism practice?”

UST side not taken

UST added that the Philippine Daily Inquirer should have gotten its side before “it rushed to print Vitug’s online article virtually word for word and in its New Year’s edition yet, even adopting her rather judgmental title as banner headline.”

The university said that while it was being accused of breaking academic rules to favor Corona, the press should also take care not to shortcut its own rules.

“We also would like to see that rules on fact-checking, objectivity and fairness are observed, so that no reputation, whether of an individual or an institution, is compromised.”