Seal dies after getting head stuck in drain | Inquirer News

Seal dies in Chinese aquarium after head gets stuck in drain 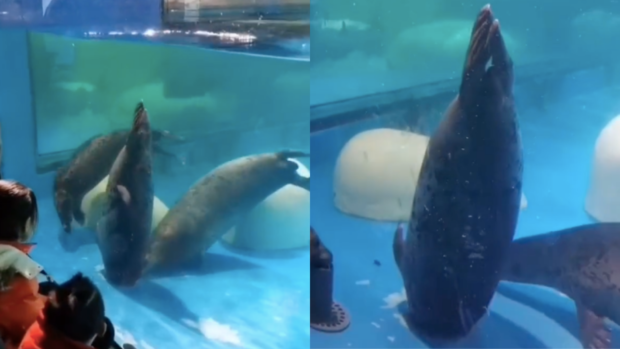 A young spotted seal died after getting its head stuck in a drain in an aquarium in Dalian, China.

Tourists saw the animal with its head in a floor drain of its exhibit in the Sun Asia Ocean World waterpark on Dec. 29, as per Daily Mail last Thursday, Jan. 2.

The incident was captured by one netizen (@ ღ o (TT) O ღ) and posted on Douyin, the Chinese version of short video app TikTok.

Visitors watched as two other seals appeared to be trying to free the stuck animal as they nudged it with their heads. One of them also seemed to pull the trapped seal out by tugging one of its flippers.

An employee later tried to remove the seal by repeatedly pulling it by its tail. After his attempts, the clip shows the worker pulling the seal’s body onto the shore of the aquarium.

According to the report, one eyewitness said the employee initially failed to free the seal because the suction of the drain was too strong. The worker successfully freed the animal only after turning off the drain.

A day after the seal’s death, the waterpark released a statement explaining how the accident happened.

The park said the animal had used its mouth and claws to open a protective board over the drain, resulting in it getting stuck. It also noted that professional trainers then attempted to carry out an emergency rescue, but were unsuccessful.

The park expressed sorrow over the seal’s death, citing that it was born and raised in the aquarium. As per report, the park is investigating the accident.

Meanwhile, the China Cetacean Alliance reportedly criticized the park on its official account on the social media platform Weibo. The said group is a coalition of international animal protection and conservation organizations.

“If a venue that keeps animals in captivity cannot ensure their basic life safety,” the group was quoted as saying, “how can it carry out conservation or education?”  Ryan Arcadio /ra