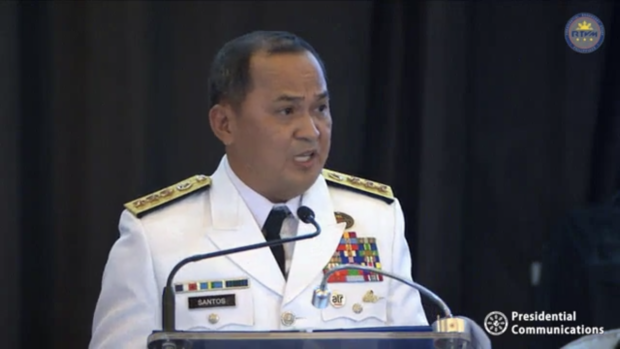 MANILA, Philippines — Newly-installed Armed Forces of the Philippines chief of staff Lt. Gen. Felimon Santos Jr. has vowed to focus on ending insurgency during his seven-month stint in the top military post.

Speaking to reporters on the sidelines of the change of command ceremony at Camp Aguinaldo on Saturday, Santos said he would continue the military’s current campaign plan on insurgency.

“That is our focus because [we are] gaining ground and we will continue what is stated in our campaign plan,” he said.

Santos, a veteran intelligence officer, is the seventh AFP chief to be appointed by President Rodrigo Duterte. He is a member of the Philippine Military Academy “Sinagtala” Class of 1986.

The indoor ceremony was presided by Duterte. Santos replaced Gen. Noel Clement, who served for just over three months before he reached the mandatory retirement age of 56.

In his speech, Santos said the government’s National Task Force to End Local Communist Armed Conflict is  “an effective solution against communist terrorists.” This program involves a whole-of-nation approach to insurgency.

Duterte has expressed several times that he wants to finish the five-decades of communist insurgency within his term.

The President also recently showed interest to revive the stalled peace negotiations with communist rebels. The formal resumptions of peace talks may begin this month.

“The national peace talks are on the table. What we’re doing on the ground is we are pushing for localized peace talks,” Santos told reporters.

No mention of West Philippine Sea

The AFP will also stay proactive against local terrorist groups such as the Abu Sayyaf and those that pledged allegiance to Islamic State, he said.

Santos also expressed commitment to support the successful implementation of the Bangsamoro Autonomous Region in Muslim Mindanao and the peace accord with the Moro National Liberation Front.

He also said the military will reaffirm its ties with all of its international allies and partners for defense cooperation.

“These shall put us in good stead in winning the war on terrorism, enable us to upgrade our military hardware, enhance our warfighting capability, facilitate training exchanges while bolstering our counterterrorism efforts,” he said.

“All of the former, together with our modernization program, will enable us to protect the integrity and sovereignty of our national territory,” Santos added.

The new AFP chief, however, made no mention in his assumption speech the prevailing maritime row on the West Philippine Sea, the foremost security challenge to the Philippines’ sovereignty and territorial integrity.

Since he became President in 2016, Duterte has pursued closer ties with China in exchange for economic deals and investments. He set aside the Philippines’ legal victory against Beijing, which rejected China’s massive claims in the South China Sea.