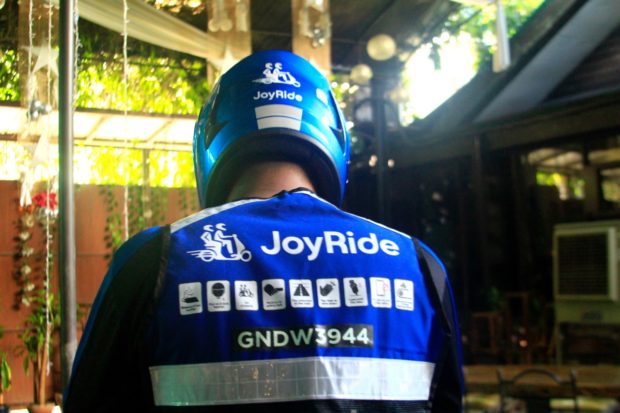 The motorcycle-taxi JoyRidePH shows to the media the full gear of its biker during the press briefing on Thursday, January 2, 2020. INQUIRER.net file photo / Gabriel Lalu

This was after commuter group Lawyers for Commuter Safety and Protection (LCSP) alleged that Pimentel influenced the TWG, under the Land Transportation Franchising and Regulatory Board.

“While we are most confident that Senator Pimentel can very well address the accusations thrown at him, we at the TWG nevertheless, would like to respond to the baseless and reckless imputations against us,” read the statement on Saturday.

“Firstly, the endorsement of Senator Pimentel on behalf of Joyride is a matter of public record, and as clearly proven in the sequence of events and timeline, HAS NO BEARING on the TWG’s decision-making process and development of the MC Taxi Service Pilot Implementation Run, he added.

Citing Pimentel’s statement, TWG said the senator endorsed JoyRide in December 2019 pilot study but the motorcycle app did not participated during the test run.

“Why then is the LCSP zeroing in on the entry of JoyRide, and raising the very same arguments against the TWG guidelines that were vociferously protested by the original pilot run partner, Angkas?” read the statement.

“Angkas has been conducting its business even outside of the designated Pilot Run areas, which is considered illegal under existing laws,” it added.

TWG added that Angkas was “cited with various safety breach like non-wearing of helmets and vests by its passengers, plus allowing the use of unauthorized safety gear.“

Two new motorcycle hailing services namely MoveIt and JoyRide PH will join a three-month extension from Dec. 23 to March 23, which will help gather and validate data on safety guidelines and reliability of motorcycles for public transportation.

After further study, lawmakers will evaluate the results of the pilot study to amend Republic Act 4136, or the Land Transportation and Traffic Code, and permit motorcycles taxis on the road.