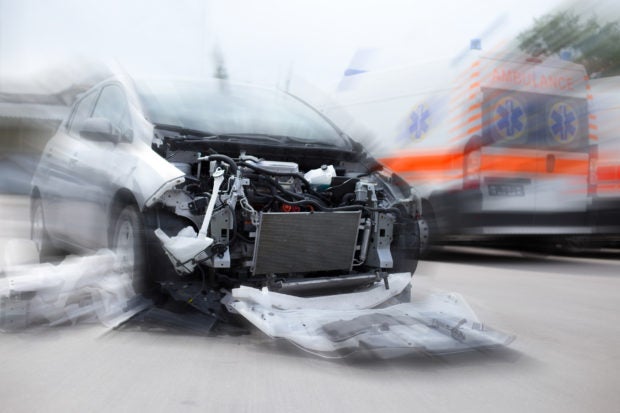 A man and a woman in China figured in an accident where the driver’s car flipped over. The woman woke up with her leg amputated.  INQUIRER.net Stock Photo

A Chinese man who got involved in a drunk driving accident with his date refuses to pay compensation for her medical bills—unless she marries him.

The man, only identified as Zhang, had insisted his date, a woman named Ma, ride home with him after they drank together last October in Anhui, an eastern province of China.

The two figured in an accident when his car flipped over. Ma’s injury on her right leg was so severe that it had to be amputated, AHTV via AsiaOne reported yesterday, Jan. 3.

In the months after the crash, Ma has been experiencing phantom limb pain from losing her right leg. Also, she has had to get her left leg treated for an infection.

Zhang and Ma met through a friend who invited them to a dinner to set them up. They had beer at a restaurant, then went to a bar where they had wine.

Ma was going to leave on her electric bicycle, but Zhang took her keys and refused to return them. He dragged her to his car and took her to his neighborhood. After she persistently told him to bring her home, he finally agreed to do so at 3 a.m.

Then the accident happened—Ma recalled the car flipping upside down and her leg in pain. Her right leg was gone when she woke up.

Zhang claimed he had no memory of the night. He paid 90,000 yuan (P661,000) for her surgery, but has refused to pay for additional treatments.

His blood alcohol content (BAC) was at 0.15%. Under the law, a driver with BAC of over 0.08% can face up to three years in jail and get a license suspension.

Zhang told Ma he would pay for the additional expenses only if she marries him and writes a mitigation letter so he can avoid jail time.

Ma has outrightly rejected the proposal. She told reporters, ”I don’t even like him. How am I going to marry him?”

Local police are investigating the incident. Action will be taken after Ma submits a medical report.  Niña V. Guno /ra

Chinese man’s corpse slapped, yanked out of coffin by kids he allegedly abandoned

Chinese man hospitalized due to collapsed lung from karaoke session