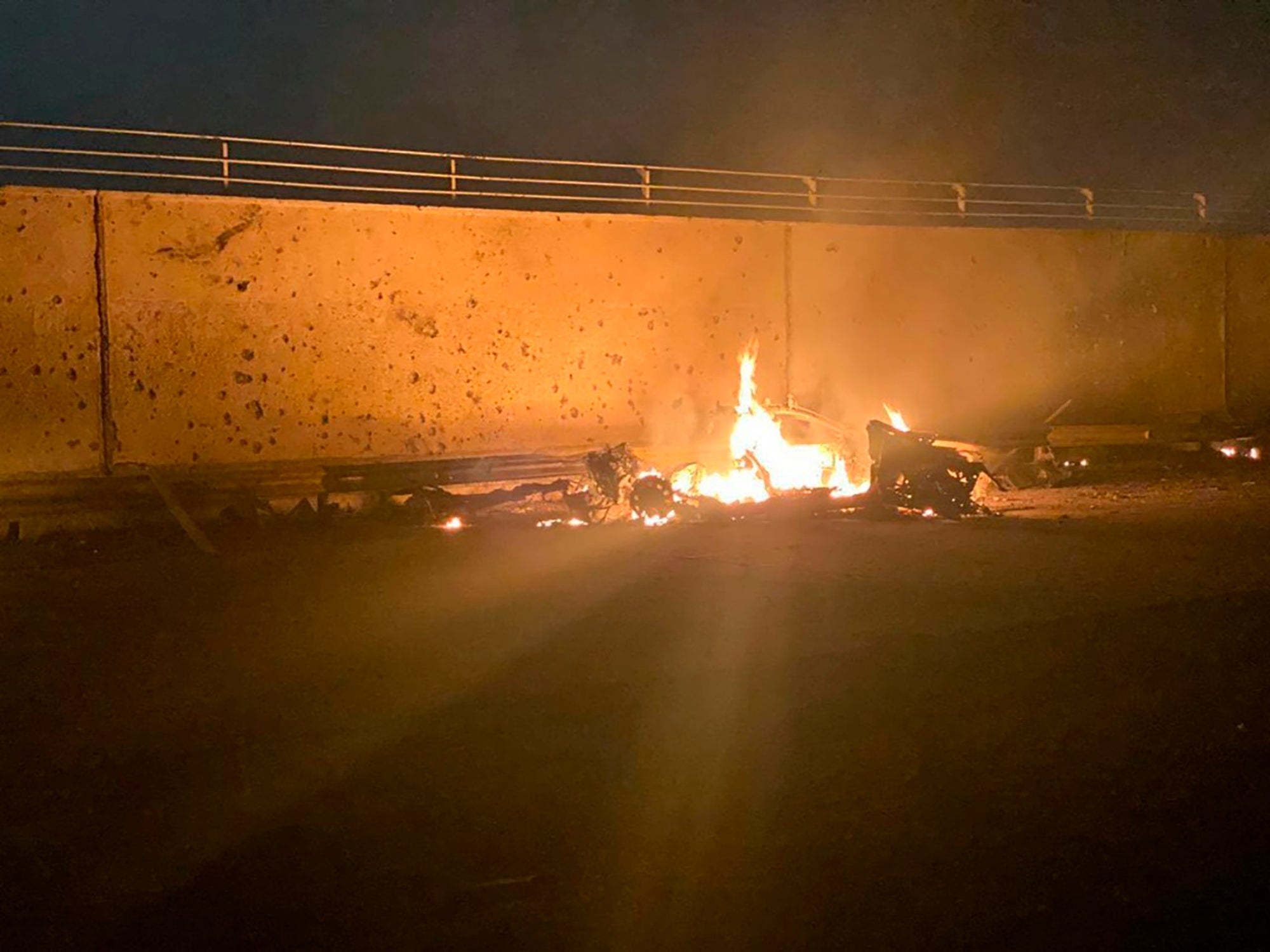 BAGHDAD, Iraq — A fresh airstrike hit pro-Iran fighters in Iraq early Saturday, as fears grew of a proxy war erupting between Washington and Tehran a day after an American drone strike killed a top Iranian general.

It came hours ahead of a planned a mourning march for Iranian Quds Force commander Qasem Soleimani and Iraqi paramilitary heavyweight Abu Mahdi al-Muhandis, slain in a precision drone strike by the U.S. in Baghdad on Friday.

The assassination was the most dramatic escalation yet in spiraling tensions between Iran and the U.S., which pledged to send more troops to the region even as US President Donald Trump insisted he did not want war.

The killing was the most dramatic escalation yet in spiraling tensions between the US and Iran, which Iraqis fear could play out in their homeland.

Almost exactly 24 hours later, a new strike targeted a convoy belonging to the Hashed al-Shaabi, an Iraqi paramilitary network whose Shiite-majority factions have close ties to Iran, the group said in a statement.

It did not say who was responsible but Iraqi state television reported it was a US airstrike.

A police source told AFP the bombardment north of Baghdad left “dead and wounded,” without providing a specific toll. There was no immediate comment from the US.

The assassination of Soleimani, who had led the Islamic Revolutionary Guards Corps’ foreign operations branch and was Iran’s pointman on Iraq, rattled the region.

US officials said the 62-year-old, who had been blacklisted by the US, was killed when a drone hit his vehicle near Baghdad’s international airport.

A total of five Revolutionary Guards and five Hashed members were killed in the strike.

Their bodies were to be taken through an elaborate mourning procession on Saturday, beginning with a state funeral in Baghdad and ending in the holy shrine city of Najaf.

The bodies of the Guards would then be sent to Iran, which had declared three days of mourning for Soleimani.

Its supreme leader Ayatollah Ali Khamenei swiftly promised “severe revenge” and tens of thousands of protesters in Tehran torched US flags and chanted “death to America.”

U.S. President Donald Trump hailed the operation, saying he decided to “terminate” Soleimani after uncovering he was preparing an “imminent” attack on US diplomats and troops.

He insisted Washington did not seek a wider conflict, saying: “We took action last night to stop a war. We did not take action to start a war.”

But the Pentagon said hours later that 3,000 to 3,500 troops from the 82nd Airborne Division’s Global Response Force would be dispatched to Kuwait.

A U.S. official had told AFP that some of the 750 troops already sent from that unit had arrived in Baghdad and would reinforce security at the US embassy there.

Some 14,000 other troops have already been deployed as reinforcements to the Middle East this year, reflecting steadily growing tensions with Iran.

There are approximately 5,200 US troops deployed across Iraq to help local forces ensure a lasting defeat of jihadists.

Pro-Iran factions in Iraq have seized on Soleimani’s death to push parliament to revoke the security agreement allowing their deployment on Iraqi soil.

Lawmakers are set to meet on Sunday for an emergency session on the strike and are expected to hold a vote.

Paramilitary figures in Iraq including U.S.-blacklisted Qais al-Khazaali and militiaman-turned-politician Moqtada Sadr called on their fighters to “be ready” after Friday’s strike.

And Lebanon’s Tehran-backed Shiite movement Hezbollah warned of “punishment for these criminal assassins.”

Soleimani had long been considered a lethal foe by US lawmakers and presidents, with Trump saying he should have been killed “many years ago.”

The last straw was an attack by a pro-Iran mob on the U.S. embassy in Baghdad this week, where demonstrators burned the entrance to the compound and besieged diplomats inside.

Analysts said the strike — which sent world oil prices soaring — would be a game-changer.

“Trump changed the rules — he wanted (Soleimani) eliminated,” said Ramzy Mardini, a researcher at the U.S. Institute of Peace.

Phillip Smyth, a U.S.-based specialist on Shiite armed groups, described the killing as “the most major decapitation strike that the US has ever pulled off.”

But many also worried that it could spill over into full-fledged conflict between the US and Iran within Iraq.

Ties between the U.S. and Iran have deteriorated markedly since Washington abandoned a landmark nuclear deal with Tehran in 2018 and reimposed crippling sanctions.