Iraqi militant killed by US worked with Iran for decades 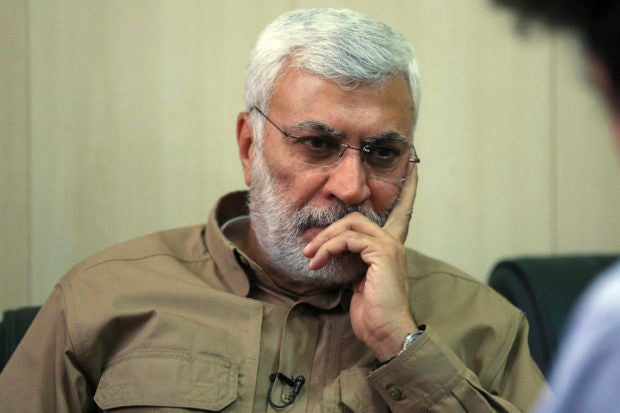 In this May 29, 2016, file photo, Abu Mahdi al-Muhandis listens to a question during an interview in Fallujah, Iraq. Al-Muhandis, a veteran Iraqi militant who was closely allied with Iran, was killed overnight Friday, Jan. 3, 2020 in a U.S. strike that also felled Iran’s top general. Al-Muhandis was the deputy commander of the Popular Mobilization Forces, an umbrella group of mostly Shiite paramilitaries. (AP Photo/Khalid Mohammed, File)

BAGHDAD — Abu Mahdi al-Muhandis, a veteran Iraqi militant who was closely allied with Iran and rose to be a senior militia commander during the war against the Islamic State group, was killed overnight Friday in a U.S. strike that also felled Iran’s top general.

Al-Muhandis was the deputy commander of the Popular Mobilization Forces (PMF), an umbrella group of mostly Shiite paramilitaries. He was also the founder of the Kataeb Hezbollah or Hezbollah Brigades. The U.S. blamed the group, which is separate from the Lebanese Hezbollah movement, for a rocket attack in northern Iraq last week that killed a U.S. contractor.

The militias, many of which are backed by Iran and trace their roots back to the Shiite insurgency against U.S. forces following the 2003 invasion, mobilized in 2014 when the Islamic State group swept across northern and western Iraq.

Al-Muhandis, who had spent much of his life as a secretive operative in Iran’s regional shadow wars, emerged as a public face of the force, a tall man with a gray beard and thick glasses who was often seen on the front lines directing his fighters by radio.

He was killed in an American airstrike near Baghdad’s international airport around midnight along with Gen. Qassem Soleimani, the commander of Iran’s elite Quds Force and the architect of its regional military alliances. Also killed was al-Muhandis’ son-in-law Mohammed Rida al-Jaberi.
The PMF said in a statement that al-Muhandis’ body was destroyed beyond recognition.

The 56-year-old militant, born Jamal Jaafar Ebrahimi but best known by his nom de guerre, began his political life with the Dawa party, a Shiite Islamist group that was crushed by Iraqi dictator Saddam Hussein in the 1970s. Like others in the party, including the future Prime Minister Nouri al-Maliki, al-Muhandis fled abroad and joined forces with Iran.

Al-Muhandis spent the next few decades in Kuwait and Iran, working closely with the Revolutionary Guard, especially during the 1980-88 Iran-Iraq war. During his stay in Iran in the 1980s and 1990s, al-Muhandis worked with the Supreme Council for the Islamic Revolution in Iraq and its military wing, the Badr Brigades.

After the U.S.-led invasion in 2003 that toppled Saddam, al-Muhandis like many other Shiite leaders returned to Iraq and played role in politics, at one point serving as a member of parliament. Under Soleimani’s direction, Iran steadily expanded its influence, forging close ties with Shiite militant groups as well as major political factions. Al-Muhandis operated independently at first before founding Kataeb Hezbollah.

In 2009, the U.S. Treasury targeted al-Muhandis and Kataeb Hezbollah with sanctions, saying they “committed, directed, supported, or posed a significant risk of committing acts of violence against Coalition and Iraqi Security Forces.”

He was also convicted of planning the 1983 bombings against the U.S. and French embassies in Kuwait in which five Kuwaitis were killed. He was sentenced to death in absentia in Kuwait over the case. He was also linked to a 1985 assassination attempt against the emir of Kuwait.

When Kuwait raised the case of the bombings with Iraqi officials in the mid-2000s, al-Muhandis relocated to Iran. He did not return until after the U.S. withdrawal in 2011.

He re-emerged during the war against the Islamic State group when his force battled the Sunni extremists across western Iraq and eastern Syria. Those efforts also helped Iran to carve out a corridor of influence stretching across the Middle East to Lebanon and Israel’s doorstep.

Al-Muhandis used to give speeches in Arabic and Farsi.

In one of his speeches, al-Muhandis thanked Iran and specifically Soleimani for joining the fight against IS and sending weapons and ammunition by land and air.

“They gave what they could immediately,” al-Muhandis said. “This courage and generosity came at a critical time.”

“When people speak about American and Russian weapons we ask them where were they in June 2014,” al-Muhandis said. That was the month IS seized large parts of Iraq, pushing all the way to the outskirts of Baghdad.

Today, PMF and allied militias control large parts of Iraq and neighboring Syria, where they are allied with President Bashar Assad and the Lebanese Hezbollah. Israel and the U.S. view the groups as part of an aggressive Iranian campaign to dominate the region.

Over the summer, PMF groups blamed Israel for mysterious drone attacks that targeted their positions in Iraq. The strikes eventually led to the restructuring of PMF to integrate them into the Iraqi military. The restructuring was approved by Prime Minister Adel Abdul-Mahdi.

On Sunday, U.S. airstrikes hit Kataeb Hezbollah posts in eastern Syria and western Iraq, killing 25 fighters and wounding dozens. Washington said the strikes were in retaliation for an attack on a base in northern Iraq that killed an American contractor and wounded four others.

Shiite militiamen and supporters retaliated by holding violent protests outside the U.S. Embassy for two days, causing damage to the entrances of the embassy. They withdrew Wednesday following a request from Iraqi officials.

In a recent interview, al-Muhandis was asked whether he sees himself one day outside the Popular Mobilization Forces. “It’s possible,” he replied. “God willing, as a martyr.”

Al-Muhandis is survived by his Iranian wife and two daughters.