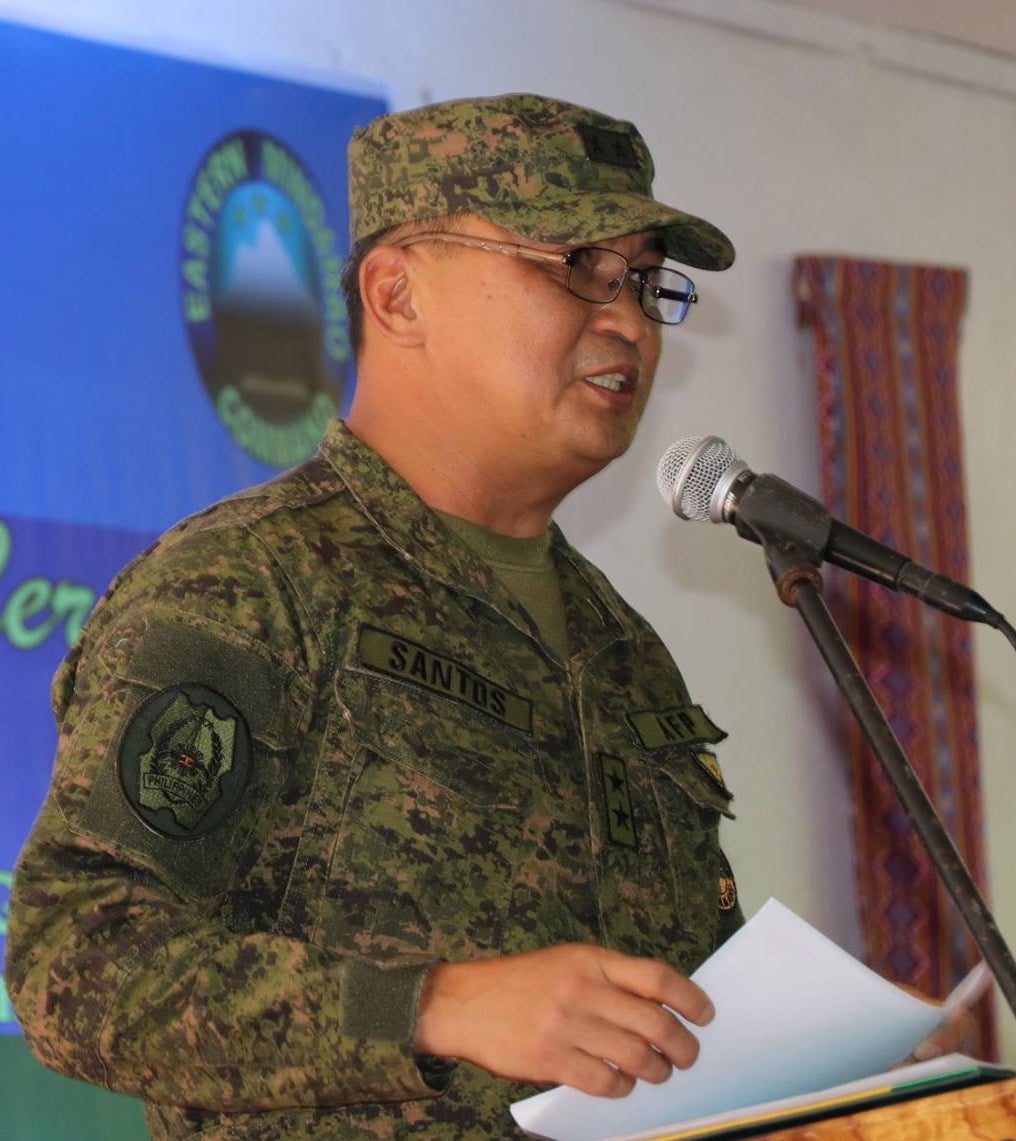 A former Army intelligence chief, who gained a reputation for being a tenacious “hunter” who had captured Abu Sayyaf and communist leaders, has been named as the new chief of staff of the Armed Forces of the Philippines.

Lt. Gen. Felimon Santos Jr., chief of the Eastern Mindanao Command (Eastmincom), will take the helm of the 190,000-strong military from Gen. Noel Clement in ceremonies on Saturday, according to Defense Secretary Delfin Lorenzana.

Santos was recommended to the post by the AFP Board of Generals headed by Clement, who will turn over the command to Santos a day ahead of his 56th birthday.

Military officers retire at 56, unless they are kept at their posts by the President.

Santos, who turned 55 on Aug. 3, graduated from the Philippine Military Academy in 1986.

He was to turn over Eastmincom to Maj. Gen. Jose Faustino Jr., the current chief of the 10th Infantry Division.

Santos was chief of the Army intelligence group when Communist Party of the Philippines leaders Benito Tiamzon and his wife, Wilma, were captured in March 2014, in Aloguinsan, Cebu.

As AFP deputy chief of staff for intelligence that same year, he was instrumental in the arrest of Abu Sayyaf finance officer Khair Mundos, who was on the United States’ most wanted terrorist list.According to Lt. Col. Ezra Balagtey, Eastmincom public affairs officer, Santos is “adept in a wide range (of) peace and security programs not only in Mindanao but in the whole country, having been assigned with the strategic offices of the AFP dealing with operations, intelligence and civil-military operations.”

Santos had served in various positions, including as head of the 11th Intelligence Service Unit in Davao City, commander of the Army’s intelligence service group and chief of operations of the Central Command in the Visayas.

Prior to heading Eastmincom, Santos commanded the 7th Infantry Division based in Fort Ramon Magsaysay in Nueva Ecija.He also served in the AFP Civil Relations Service and was commander of Army Civil-Military Operations Group.

In a statement, Santos thanked Mr. Duterte for his trust and confidence.

“We will continue to support all the priority programs regarding peace and security of the President,” he said.

Santos assured Filipinos of the military’s full support to ending the communist insurgency and neutralizing terrorists, including the Abu Sayyaf, the Bangsamoro Islamic Freedom Fighters and other groups that have pledged allegiance to the jihadi group Islamic State.

The military also will continue backing the Philippine National Police and the Philippine Drug Enforcement Agency in the administration’s war on drugs, he said.

Read Next
JoyRide on ownership issue: We have nothing to hide
EDITORS' PICK
PH economy seen to slow down anew
A gem of a residence in the new normal
DOH sees opportunity to boost COVID-19 response
Water remains our saving grace right now
Metro Manila, 4 other areas back on lockdown
Smart 5G goes live
MOST READ
MECQ guidelines in infographics
Metro Manila, 4 other areas back on lockdown
You’re my ‘idol’ in crafting laws, neophyte senator ‘Bato’ tells Drilon
Citing Duterte order, Lorenzana says PH won’t join other navies in South China Sea drills
Don't miss out on the latest news and information.