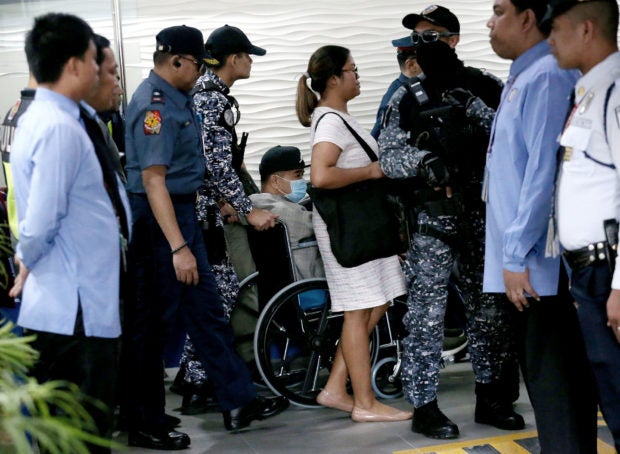 BACK TO JAIL As the bid for an extension of his hospital confinement for a stroke gets rejected by Judge Jocelyn Solis-Reyes, former Autonomous Region in Muslim Mindanao Gov. Zaldy Ampatuan is taken back to jail at Camp Bagong Diwa. INQUIRER file photo / RICHARD A. REYES

MANILA, Philippines–Maguindanao massacre convict and former Autonomous Region in Muslim Mindanao (ARMM) Gov. Zaldy Ampatuan has asked the Quezon City Regional Trial Court (QCRTC) permission to allow his stay at the New Bilibid Prison’s (NBP) infirmary so he can continue with his therapy and rehabilitation.

The former ARMM governor was among the 28 individuals who were convicted to suffer reclusion perpetua or up to 40 years imprisonment without parole for the death of 57 people.

He was hospitalized on October last year after suffering a stroke. He stayed at the Makati Medical Center’s Intensive Care Unit up to October 29, 2019. After that, he was transferred to a regular room until the QCRTC ordered his transfer back to Camp Bagong Diwa for the promulgation last Dec. 19, 2019.

In an urgent motion dated Dec. 23, the former governor, through his counsel, said he needs to “undergo aggressive therapy and rehabilitation and to continue with his daily medications”

His daily medications include 14 kinds of medicines that needed to be taken daily, one medication to be taken four times a week, one requires four times of one drop daily and 14 units of insulin at bedtime.

“In view of the rigorous updated medications and follow-up consultations indicated in his Home Instruction Form that Zaldy is required to undergo, he is constrained to respectfully request this Honorable Court that he be allowed to be transferred to the infirmary of the NBP, in order to receive the therapy, rehabilitation and medication prescribed by his doctors, and so as not to unduly put his health in jeopardy,” read his urgent motion.

The urgent motion made an assurance that Zaldy Ampatuan will strictly comply with all the logistic, security and other administrative measures that the court will impose.