The Bureau of Jail Management and Penology (BJMP) told Quezon City Regional Trial Court Branch 221 Presiding Judge Jocelyn Solis-Reyes that Ampatuan was rushed to hospital after suffering stroke on October 22 and has since been confined at the hospital’s Intensive Care Unit (ICU) until October 29, before he was transferred to a regular room.

The letter, which was submitted to the court, also stated that Ampatuan’s “final diagnoses” is “acute infarct, right frontotemporoparietal cortical subcortical areas, right MCA territory, hypertension, diabetes mellitus, chronic atrial fibrillation and with remarks as stated in the medical abstract.” 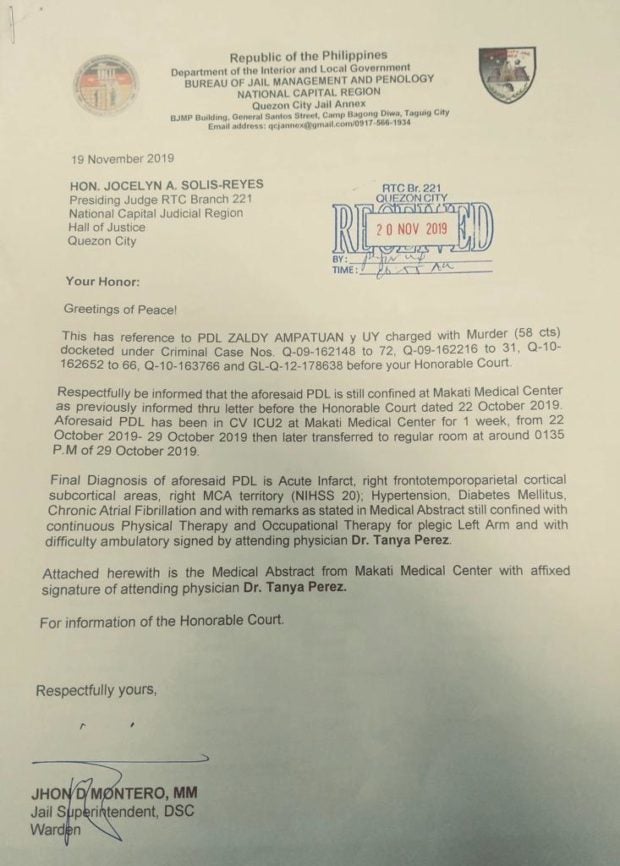 Aside from the former ARMM governor, the other principal respondents to the case are his brothers – former Datu Unsay mayor Andal Ampatuan Jr. and Sajid Islam Ampatuan. All of them are facing multiple murder charges for the massacre of 58 people including 32 print and broadcast journalists.

Their father, former Maguindanao governor Andal Ampatuan Sr. who is also among those charged in the case, died in 2015 while under detention due to a lingering illness.

The case was supposed to be decided this month after it was submitted for resolution in August but Solis-Reyes asked the Supreme Court for additional time before coming up with a decision.

The high court granted Solis-Reyes’ request for a one-month extension, and she is expected to render a decision on the case on or before December 20.

The trial of the case dragged on for 10 years due to the sheer number of the accused – 197, and victims – 58, changing of counsel by the accused, numerous motions and pleadings, as well as threats and deaths against several witnesses.

Of the 197 accused, 90 are in detention including the Ampatuan siblings; 11 are out on bail including their brother, Sajid Islam who was allowed to post bail by the court; eight have died including Ampatuan Sr.; two were discharged as state witnesses while six others were dropped as respondents.