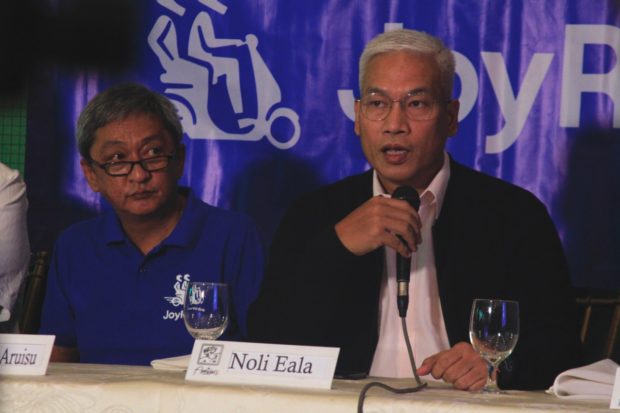 MANILA, Philippines – An official of the new motorcycle-for-hire application JoyRide has disputed allegations of using “trolls” or fake users on social media to boost their reviews on their Facebook page.

According to Noli Eala, JoyRide’s Vice President for Corporate Affairs, there is no sense for them to resort to such measures, claiming that the people who posted good reviews were their actual customers.

“We do not use any trolls, kami po, from JoyRide.  We don’t see any reason why we should, unang-una po these are actual riders, kasi talaga naman pong pati mga litrato pino-post nila,” Eala said in a press conference on Thursday.

“It doesn’t make sense for us, from a business perspective, to use trolls, because that would also affect our riders,” he added.

Over the holidays, netizens who are supportive of Angkas — JoyRide’s competitor and an established bike-for-hire app — have slammed JoyRide and called for its boycott.  They questioned why people are commenting on JoyRide’s reliability, given that it has been operational just this December 2019.

Claims of the app being owned by government officials also surfaced, but JoyRide’s management denied it earlier, and cleared administration allies, Senators Christopher “Bong” Go and Koko Pimentel of having a stake in the management of the company.

JoyRide President Sherwin Yu also clarified that he is not related to Pimentel’s wife, Kathryna Yu-Pimentel, while Eala insisted that Go is not part of their management.

Chief Development Adviser Edwin Rodriguez meanwhile urged people to try it for themselves and see whether the reviews of the alleged “trolls” are far-fetched or realistic.

He also stressed that JoyRide does not charge additional fees during peak hours or surge fees which means that they charge less than other competitors like Angkas — something that most of the people who gave JoyRide good reviews observed.

Like Angkas, JoyRide is a smartphone-based app giving commuters wanting to evade heavy traffic in Metro Manila an option to ride motorcycles to their destination.

However, these apps are not yet fully authorized to operate, as they are under pilot testing period which will be used to assess the viability of this mode of transportation.