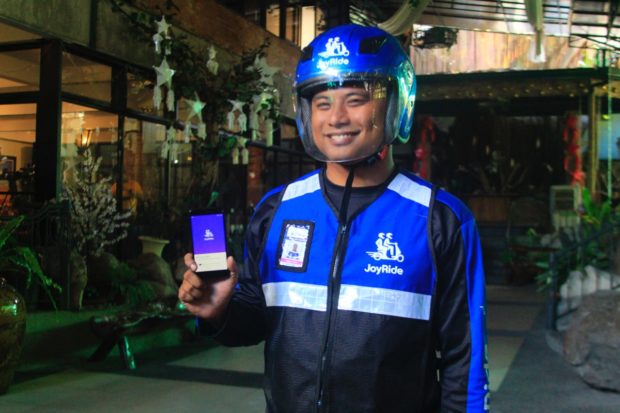 The motorcycle-taxi JoyRidePH shows to the media the full gear of its biker during the press briefing on Thursday, January 2, 2020. Gabriel Lalu/Inquirer.net

MANILA, Philippines – Motorcycle-for-hire application JoyRide PH has assured the public that no government official is part of their management, contrary to claims on social media that some administration personalities have a stake in the company.

On question of the media at a press conference Thursday, JoyRide executives admitted that the company had asked Senator Koko Pimentel to endorse its request letter to  Department of Transportation Secretary Arthur Tugade to be able to operate in the transport scene.

The ride-hailing app, however, was quick to belie allegations that Pimentel had a stake in the company.

“Senator Pimentel is a family friend of the owners, just a friend, wala hong business (interests).  It was simply because we need a way to send our letters faster to the (DOTr),” JoyRide’s Vice President for Corporate Affairs Noli Eala said.

Eala  was pressed to answer why Pimentel was also chosen to endorse the letter, given that he is not involved in the Senate’s transportation committee.

In a letter dated September 3, 2019, Pimentel endorsed Yu’s letter requesting the participation of JoyRide in the pilot implementation of bike-for-hire apps.  Attached to the letter is Yu’s letter to Tugade.

Eala insisted there was nothing irregular about the letter, as they were merely looking for an avenue to speed up their request. He also clarified that it was still not acted upon by DOTr officials even with Pimentel’s letter.

Yu, a businessman in the information technology field, also insisted that he is not related to Pimentel’s wife, Kathryna Yu-Pimentel.

Aside from Pimentel, administration Senator Bong Go was also rumored to have interests in JoyRide — something that the company officials also shot down.  They said that their records are available with the Security and Exchange Commission to show that the company is owned by members of the Nubla and Chua families.

“I hope you’re not looking for Senator Bong Go,” Eala told reporters at the press conference.  “Hindi po siya miyembro ng JoyRide and has never been part of Joyride… and neither is anybody from government.”

JoyRide is a smartphone-based application offering motorcycle rides to commuters who would want to go through the horrendous metro traffic as an alternative to regular taxis and other app-based vehicles.  It looks to challenge Angkas, which is currently the largest bike-for-hire app in the country.

Motorcycle apps are still not fully legal in the Philippines, as the riders are now operating through a pilot testing period which will culminate on March 2020.  After this, a study would be created to check on this mode of transportation’s viability.

JoyRide grabbed headlines before the end of 2019 as several netizens claimed that the application employed trolls on social media to boost its ratings, with the alleged trolls saying that the bike-for-hire app has a reliable and good record despite it starting just a few days before the issue popped up.

This was denied by Eala and Chief Development Adviser Edwin Rodriguez, who said that such moves are self-serving.