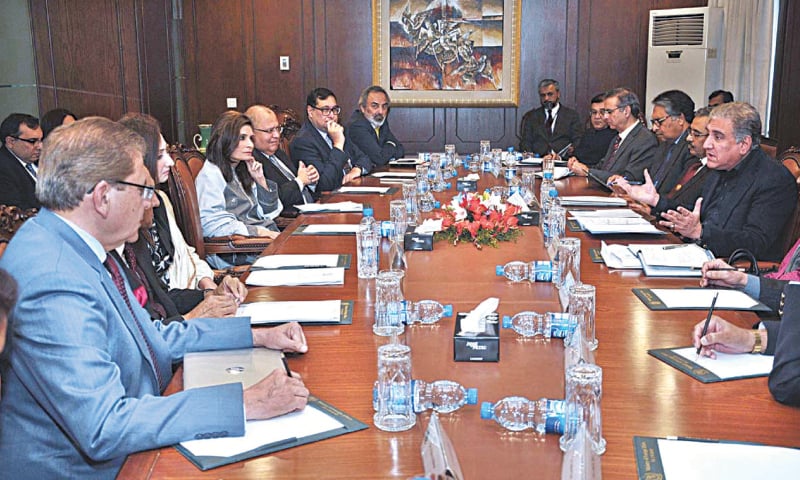 ISLAMABAD — The Pakistani government is planning to launch a fresh diplomatic outreach and an accompanying media campaign to nudge the world to end its silence on the Indian government’s human rights abuses.

Foreign Minister Shah Mehmood Qureshi on Monday chaired meetings of the Advisory Council on Foreign Affairs and an inter-ministerial committee to discuss the worsening humanitarian crisis in occupied Kashmir, intensified cease­fire violations by Indian forces along the Line of Control (LoC), and raging protests against contentious citizenship law in India.

These meetings followed last Friday’s consultative session with former foreign secretaries on the developing situation in India and the threat of a military misadventure by Indian armed forces against Pakistan.

The advisory committee meeting, which was att­end­ed by former foreign secretaries, retired diplomats, and foreign policy experts, recommended reinvigorating diplomatic contacts for highlighting the worsening humanitarian crisis in occupied Kashmir due to the curfew that has been continuing since Aug 5 annexation of the valley by India.

Speaking at the meeting, Mr Qureshi said that the government was determined to highlight the plight of Kashmiris living in occupied valley. In this regard, all steps would be taken to raise the voice of Kashmiris at major forums including the UN Security Council.

The international media coverage, he observed, is inviting the world attention to sufferings of Kashmiris.

In a separate statement, the foreign minister, while discussing the anti-Citizenship Amendment Act (CAA) and National Register of Citizens protests, said that India today stands clearly divided between two ideologies — those supporting the ideal of secular India and proponents of Prime Minister Modi’s Hindutva agenda.

“This fight is no more restricted to any particular religion, ethnicity, or region, it has spread all over India,” he said.

Urging the world to speak about the predicament of Indian minorities, Mr Qureshi said that remaining silent was no more an option. “I understand that some governments may be compelled by exigencies of commercial ties with India, but I want to remind them that they also have to honor their democratic values,” he added.

People, the foreign minister said, were already talking about the world’s double standards. These countries, he believed, would have to stop prioritizing their narrow interests and talk about suffering humanity in India.