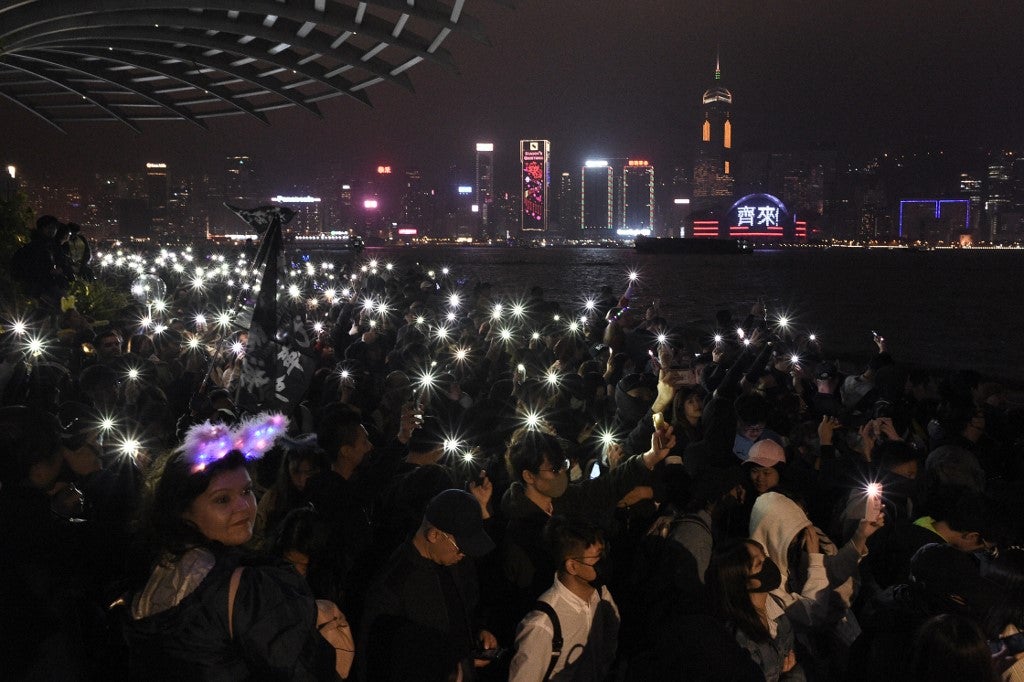 Pro-democracy protesters and people gather at the promenade of Tsim Sha Tsui district as they they take part in a rally and to celebrate the new year’s eve, in Hong Kong on December 31, 2019. Pro-democracy protesters in Hong Kong held hands and formed human chains across the city on December 31, as they carried their months-long movement and its demands into 2020 with midnight countdown rallies and a massive march planned for New Year’s Day. Photo by Philip FONG / AFP

The city has been battered by more than six months of unrest with marches attended by millions, as well as confrontations in which police have fired tear gas and rubber bullets — and protesters have responded with petrol bombs.

Before midnight on Tuesday, thousands of protesters gathered across the financial hub, including along the waterfront of Victoria Harbour and at nightlife hotspot Lan Kwai Fong.

Protesters at the harbourfront counted down chanting “Ten! Nine! Liberate Hong Kong, revolution now!” as they lit up their phones in a sea of lights.

Shortly before the final day of 2019 drew to a close, police had used water cannon to disperse protesters in the same area while, in nearby Prince Edward neighborhood, officers arrested several protesters staging a candlelight vigil.

Earlier in the evening, thousands of people linked arms in human chains that stretched for miles along busy shopping streets and through local neighborhoods.

They chanted slogans, sang “Glory to Hong Kong” — a protest anthem — and held up posters calling for people to fight for democracy in 2020.

“Thanks to 2019, which tore off the ugly masks of the police and the government and let the people see the truth,” said protester Kris, a medic who joined protest.

“The movement is kind of like at its bottleneck now. Hopefully a huge turnout at tomorrow’s march could bring back people’s passion,” he added.

The city’s traditional New Year Eve’s bumper fireworks display was cancelled due to safety concerns, but a light show and smaller-scale fireworks took place instead.

In late November, the city’s pro-democracy camp scored a landslide victory in a municipal-level vote seen as a referendum on the Beijing-backed government’s handling of political unrest.

The protest movement has since become quieter but sporadic clashes have persisted.

In a New Year’s video message broadcast on state media, Chinese president Xi Jinping said Hong Kong’s recent upheaval was concerning and that the “people of our motherland” expected stability in the restive city.

But protesters have vowed to continue their effort to push for greater democratic freedoms and police accountability.

On Tuesday night, demonstrators also swarmed major shopping malls, which have become regular protest venues in an effort to cause economic disruption.

“2019 is a remarkable and special year for every single Hongkonger,” 25-year-old teacher Sam told AFP as he celebrated New Year’s Eve with his family at the harbourfront.

“People’s demands are loud and clear, but the government is not listening. In 2020, I really hope it will be a better year for all Hong Kong people.”

The Civil Human Rights Front, the chief organizer of marches, hopes for a huge turnout at Wednesday’s rally to urge the government to respond to the demands of the pro-democracy movement — which include an independent inquiry into the police, amnesty for arrestees and fully free elections.

Police have arrested nearly 6,500 people since June — nearly a third of them aged under 20.

“The youngsters have sacrificed a lot for justice… 2019 is a wake-up call,” a 63-year-old retiree, who gave his surname as Shiu, told AFP.

“People will be more determined in the new year. People know that the future of Hong Kong depends on whether we can achieve the five demands.”

The demonstrations were sparked by a now-abandoned bill to allow extraditions to the authoritarian mainland, but have since morphed into a popular revolt against Beijing’s control — the biggest crisis since the former British colony’s return to Chinese rule in 1997.