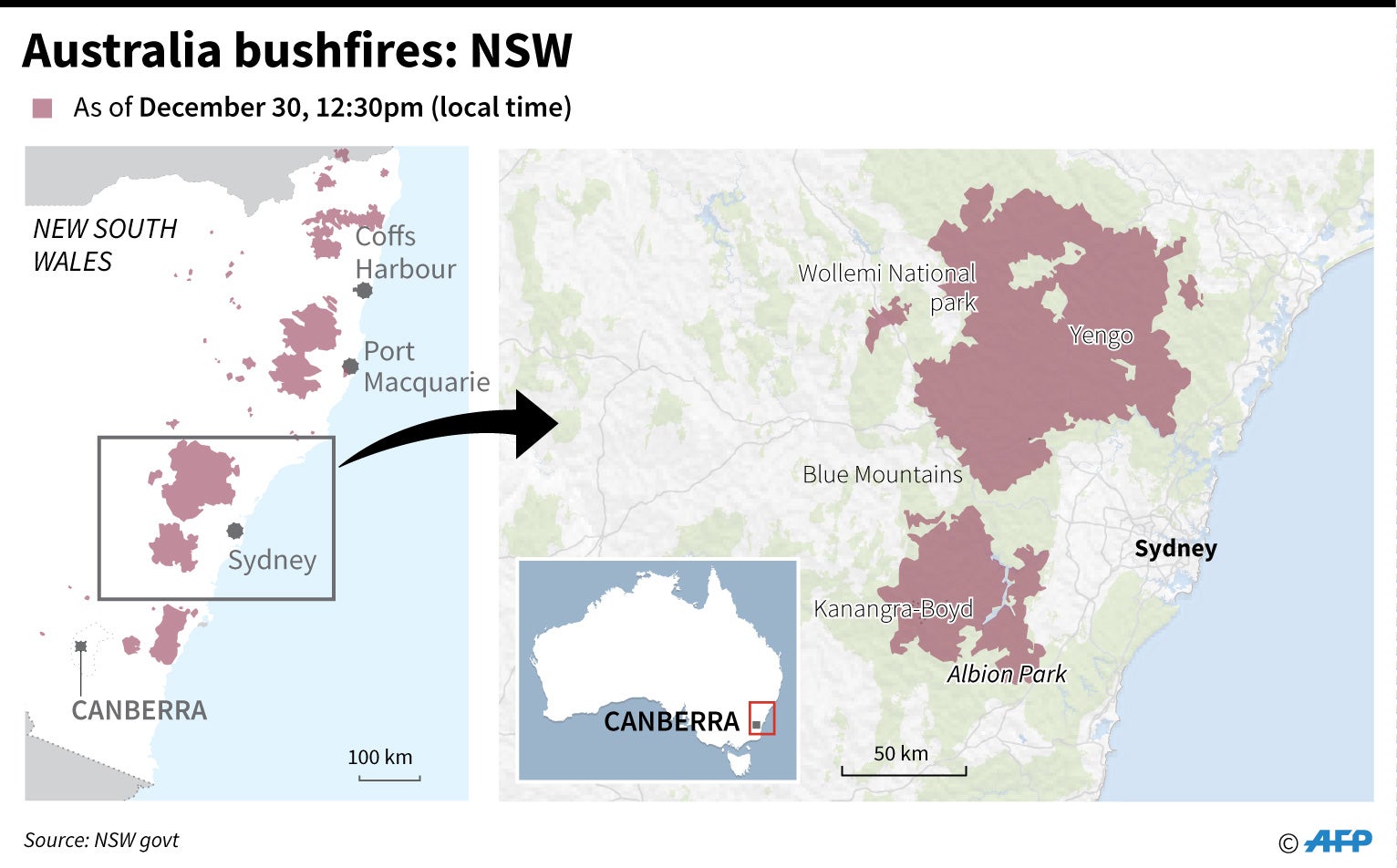 SYDNEY — Thousands of holidaymakers and locals were trapped on a beach in fire-ravaged southeast Australia Tuesday, as blazes ringed a popular tourist area leaving no escape by land.

As many as four thousand people are trapped on the foreshore of the encircled seaside town of Mallacoota, as smoke turned day to night and the authorities said nearby fires were causing extreme thunderstorms and “ember attacks”.

“We’ve got a fire that looks like it’s about to impact on Mallacoota,”  Victoria’s Emergency Management Commissioner Andrew Crisp told public broadcaster ABC, adding that firefighters have been deployed to protect the group.

Authorities had for days been warning up to 30,000 tourists enjoying Australia’s summer holidays to leave the area, which is just one of the hundreds ravaged by this devastating bushfire season.

“We’ve got three strike teams in Mallacoota that will be looking after 4,000 people down on the beach there,” Crisp said. “We’re naturally very concerned about communities that have become isolated.”

Preparations were reportedly underway for a sea or airborne evacuation if needed.

On social media, residents said they were putting on life jackets in case they need to seek refuge from the fire in the water.

Temperatures in bushfire areas can hit hundreds of degrees Celsius (Fahrenheit) killing anyone nearby, long before the flames reach them.

The ocean is a “last resort option” according to Victoria’s emergency management agency.

Local radio journalist Francesca Winterson said she was watching the fire approach the town and her own home while she tried to broadcast emergency warnings amid a powercut.

“I’d rather be alive than have a house,” she told ABC Gippsland.

To the north, on the New South Wales coast, holidaymakers were also warned that several “dangerous” blazes were moving quickly and they should seek shelter on beaches if necessary.

“These fires moved quickly this morning. They pose a serious threat to life. Do not be in their path. Avoid bushland areas. If the path is clear, move to larger towns or beaches to take shelter,” New South Wales Rural Fire Service said.

Australia’s unprecedented bushfires have been burning for months, but a new heatwave and high winds have wrought new devastation.

The crisis has hit cities like Sydney and Melbourne, home to several million people.

On Monday, around 100,000 people were urged to flee five Melbourne suburbs as the spiraling bushfire crisis killed a volunteer firefighter battling a separate blaze in the countryside.

Authorities in the country’s second-biggest city downgraded an earlier bushfire emergency warning but said residents should steer clear of the blaze, which has burned through 40 hectares (nearly 100 acres) of grassland.

Local media showed images of water bombers flying over neighborhoods, and families hosing down their homes in the hope of halting the fire’s spread.

A volunteer firefighter died in New South Wales state and two others suffered burns while working on a blaze more than five hours southwest of Sydney, the Rural Fire Service said.

“It’s believed that the truck rolled when hit by extreme winds,” the agency said in a tweet.

Ten others, including two volunteer firefighters, have been killed so far this fire season.

The blazes have destroyed more than 1,000 homes and scorched more than three million hectares (7.4 million acres) — an area bigger than Belgium.

The fires have been turbocharged by a prolonged drought and climate change, but conditions worsened on Monday with high winds and temperatures soaring across the country.

The mercury has reached 47 degrees Celsius (117 Fahrenheit) in Western Australia and topped 40 degrees in every region — including the usually temperate island of Tasmania.

The crisis has focused attention on climate change — which scientists say is creating a longer and more intense bushfire season — and sparked street protests calling for immediate action to tackle global warming.

While conservative Prime Minister Scott Morrison belatedly acknowledged a link between the fires and climate change, he has continued his staunch support of Australia’s lucrative coal mining industry and ruled out further action to reduce emissions.

Sydney was again shrouded in toxic bushfire smoke haze Tuesday, a situation that has for weeks forced children to play indoors and caused professional sporting events to be canceled.

But city officials said Sydney’s New Year’s Eve fireworks would go head, but a similar event has been canceled in Canberra and several regional towns.