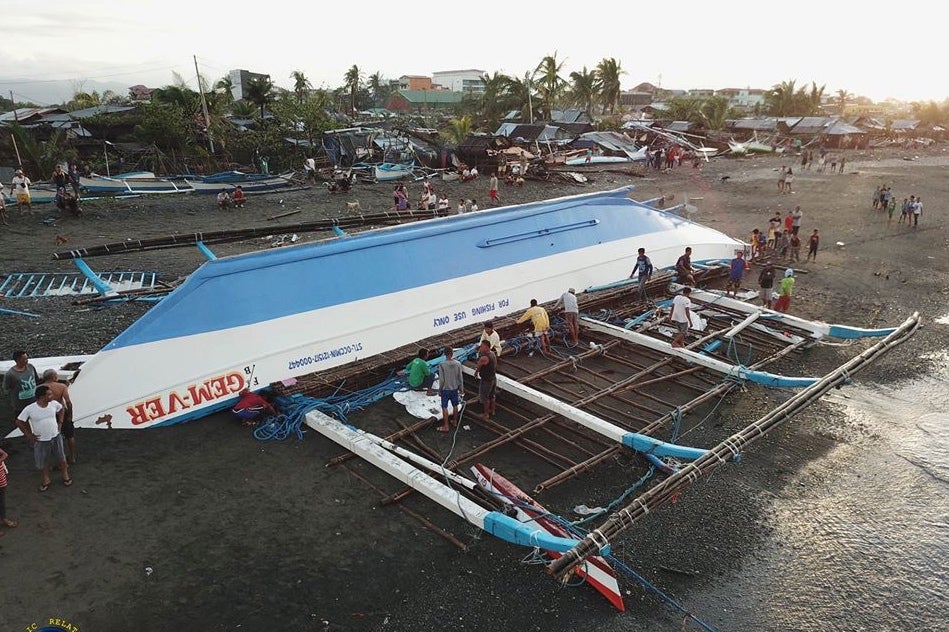 CALAPAN CITY—Millions of pesos spent to repair Gem-Ver 1 may have gone to waste after Typhoon “Ursula” (international name: Phanfone) battered the fishing boat, which became a center of controversy between the Philippines and China after it was rammed by a Chinese trawler earlier this year.

Aside from the 14-ton vessel, three other fishing boats were also blown ashore in San Jose, Occidental Mindoro province, by Ursula’s winds, according to Barangay San Roque Councilor Rocky Insigne.

All the vessels belonged to the family and relatives of Gem-Ver 1 owner Arlinda dela Torre.

Gem-Ver 1 came to public attention in June after the Chinese trawler rammed and sank the Filipino vessel at Recto (Reed) Bank in the West Philippine Sea. The 22 crew members were left struggling to save themselves before they were rescued by Vietnamese fishermen hours later.

The boat was salvaged and towed back home to San Jose.

The ramming drew public condemnation of the Chinese fishing boat, which was suspected to be part of China’s maritime militia.

The incident generated support for Gem-Ver’s crew, who received donations to repair their boat.

“It was able to sail last November [for the first time since the Recto Bank incident]. After it returned home, here came the typhoon,” said Insigne, a relative of former Gem-Ver 1 skipper Junel Insigne.

A picture posted online by the San Jose municipal government showed the boat’s blue-and-white hull belly up, its left outrigger detached and parts of what appeared to be its deck damaged. A much smaller boat was pinned under its right outrigger.

Another boat, the Queen Myrasol, was shown overturned on the beach in Barangay San Roque.

“I am not sure if (Gem-Ver 1) could still be of use. That would depend on what [the boat repairmen] would say,” Insigne told the Inquirer by phone.San Jose was one of the hardest-hit towns in Occidental Mindoro, prompting Mayor Romulo Festin to declare it under a state of calamity.

Power and communication lines were still down as of Friday as workers scrambled to clear the roads of toppled trees.

Elizer Salilig, director of the Bureau of Fisheries and Aquatic Resources in the Mindoro, Marinduque, Romblon, Palawan region said the local government has requested 100 fishing boats to replace those destroyed or damaged by the typhoon.

Disaster officials reported that 46 families, or 183 people, from San Jose were still housed in temporary shelters.

Read Next
Palace names new NCCA chair
EDITORS' PICK
A gem of a residence in the new normal
Been there, done that but what’s the difference between MECQ and GCQ?
BREAKING: 3,226 latest COVID-19 cases bring PH’s total to 106,330
Water remains our saving grace right now
PNP: Checkpoints back in MECQ areas
Smart 5G goes live
MOST READ
MECQ guidelines in infographics
Doctors group to Duterte: ‘There was never a call for a revolt’
MECQ in NCR, other areas: Mass transportation suspended, quarantine pass required anew
Corruption during pandemic? Don’t blame it all on Duterte – Pacquiao
Don't miss out on the latest news and information.