43,000 displaced by typhoon still staying in temporary shelters in Visayas 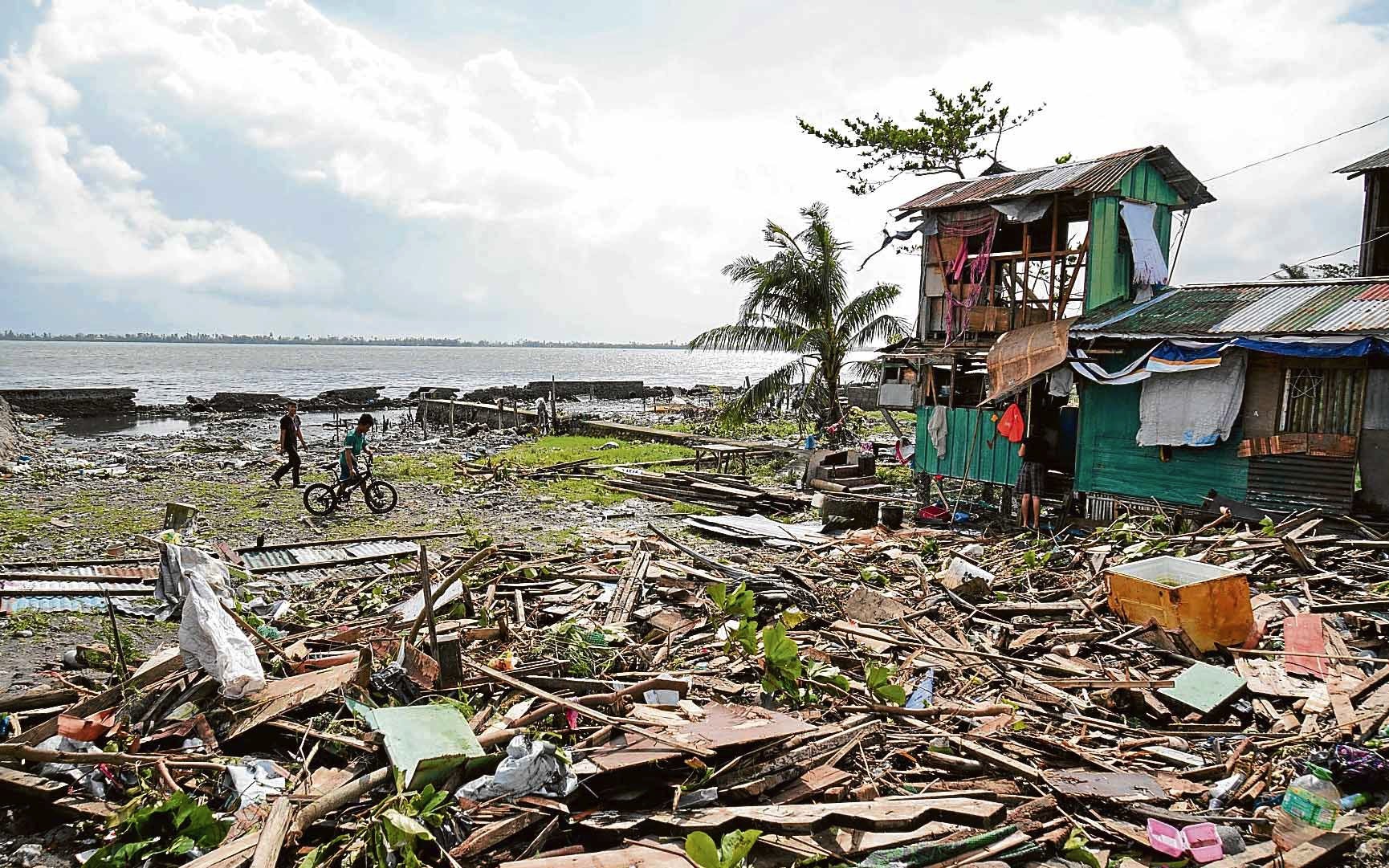 HIT HARD Typhoon “Ursula” flattened houses in Tacloban City in Leyte as it sliced through provinces in the Visayas starting Christmas Eve. —AFP

Panay, where more than 55,000 houses were damaged or destroyed, was one of the worst-hit islands in Ursula’s path and large areas remained crippled as of Friday.

Officials said it could takes days if not weeks before power supply is fully restored in the whole of Aklan province and most of neighboring Capiz, and the northern towns of Antique and Iloilo.

Survivors said the floods this time were worse than those during Supertyphoon “Yolanda” (international name: Haiyan), which barreled through Panay six years ago.

Broderick Train, executive officer of the Antique disaster office, reported 6,375 houses were damaged or destroyed in the province.

Some villages, including five in just one town in Capiz, remained isolated due to flooded roads.

Some roads still needed to be cleared of debris and felled electric posts, officials said.

The northern Panay towns of Caluya, Libertad and Pandan in Antique have been placed under a state of calamity.

Authorities said the death toll rose from 20 on Thursday as information came in from badly hit areas where internet and mobile phone networks had been cut.

“The likelihood is present that the casualty count will still increase. We’re hoping against it,” Mark Timbal, spokesperson for the National Disaster and Risk Reduction Management Council, told Agence France-Presse.

He said at least 12 people were still listed as missing.

Among those killed were several members of a family who drowned, a policeman electrocuted by a toppled post while patrolling, and a man struck by a falling coconut tree.

Ursula hit late on Tuesday with winds of up to 140 kilometers per hour and gusts of up to 195 kph, dumping sheets of uninterrupted rain on a string of islands and ruining or disrupting Christmas festivities for hundreds of thousands of people.

About 115 flights canceled and ferry services were suspended, stranding thousands.

“People did not expect that the storm would be that devastating,” Timbal said.

The typhoon displaced tens of thousands living on the coast and low-lying areas who were forced to celebrate Christmas in evacuation centers.

It also hit Boracay Island off the northern tip of Panay, which draws more than a million tourists a year.

Coconut trees on the island were uprooted and windows in some resorts were blown in during the typhoon. Ferry services to and from Boracay were cut on Wednesday and Thursday.

No one died on the resort island, however, and the damage was not on the scale of badly hit coastal towns elsewhere in the central Philippines.

The Philippines is the first major landmass facing the Pacific typhoon belt, and is hit by an average of around 20 storms a year.

Though much weaker, Ursula tracked a similar path as Yolanda, the country’s deadliest storm on record which left more than 7,300 people dead or missing on Nov. 8, 2013.

It was also less powerful than other typhoons this year, but it made landfall in some of the country’s poorest and least-developed islands.

Among them was Samar, which was also battered by Yolanda.

Residents there were clearing debris, with wooden pillars and sheets of corrugated iron roof that were once homes, scattered across the ground.

Men pulled and tried to recover fishing boats with tangled or damaged outriggers.

Samar resident Virgilo Catayas, whose sibling was among those killed by Yolanda, said he lost another to hypertension when Ursula hit.

“We can’t really do much if that’s what happened, we’ll have to accept it,” he told ABS-CBN television. “The important thing is to stay strong.”

But she said that “preparing and responding to the typhoon would have been easier if a single agency were already on top of it.”

The Yolanda experience was “probably the reason why the damage has been kept to a minimum, and early recovery is faster than it used to,” said Romualdez, the former Leyte representative.

Under the House bill, the DRR will be the primary agency responsible for managing national government efforts to prevent and reduce disaster risks as well as prepare for and respond to calamities.

The proposed department will also spearhead efforts by ravaged communities to “recover, rehabilitate and build forward better” after a disaster.

Ursula blew out into the South China Sea on Thursday morning.

It was tracking toward Vietnam on Friday but forecast to weaken significantly into a low pressure area well before making landfall again. —WITH REPORTS FROM AFP