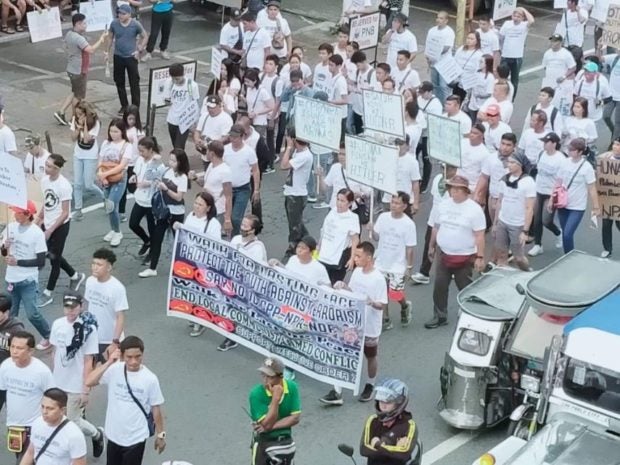 Anti-communism. Civilian volunteers joined a PNP-led rally against insurgency on the 51st anniversary of the Communist Party of the Philippines. Contributed by CALABARZON PNP

SAN PEDRO CITY — The Philippine National Police (PNP) on Thursday led a parade of at least 2,000 people in support of the administration’s policy to end the communist insurgency.

The activity, dubbed as a “Walk for Lasting Peace,” coincided with the 51st anniversary of the Communist Party of the Philippines (CPP).

It was the first time for such kind of event, simultaneously held across Calabarzon and was meant to create some semblance of a mass civilian support to the anti-communist propaganda.

In a phone interview, regional police chief spokesperson Lt. Col. Chitadel Gaoiran said most of those who joined were members of the PNP-Highway Patrol Group’s civilian multipliers and of civic groups, like Hands Off Our Children.

Hands Off Our Children campaigns against the alleged recruitment of university students to the the New People’s Army, the CPP’s armed wing. 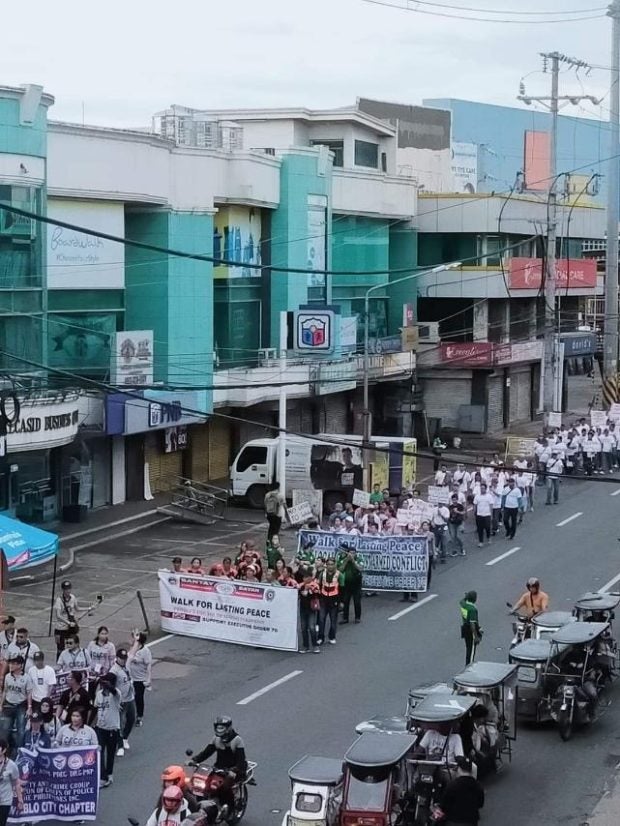 The main parade started at the monument of national hero Dr. Jose P. Rizal in Calamba City, Laguna and ended with a program at the city’s crossing, ironically, where militant protest actions were also commonly held.

An alias “Marco,” who claimed to be a former rebel and concealed his face by wearing a bull cap, gave a testimony on stage.

“The NPA claims to be pro-masses but why would they eat in civilian houses or burn construction equipment of companies that refused to pay (revolutionary) taxes,” he said in Filipino.

Another woman also spoke to the audience about how her son was recruited by the NPA.

Gaoiran said the PNP in Calabarzon would abide by the president’s order to suspend offensive operations against the NPA for the holiday truce.

She said they have yet to monitor any threat of an attack by the group.

A similar rally was also held and attended by hundreds in Legazpi City, Albay also on Thursday morning.

The so-called indignation rally against the CPP-NPA-NDF was held at the Albay Peñaranda Park.