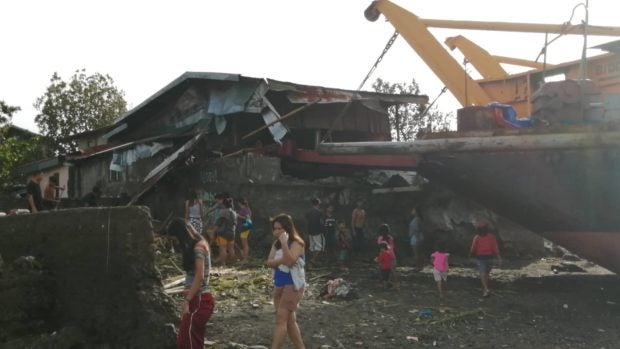 The bow of a barge rams into the wall of the house owned by Lucia Tugonon in Barangay Punta, Ormoc City, Leyte at the height of typhoon “Ursula” on Tuesday night. photo by Robert Dejon, Inquirer Visayas

ORMOC CITY – Strong winds stirred by Typhoon Ursula sent three barges and a tug boat slamming into the shore of a coastal village here, according to the Philippine Coast Guard (PCG).

One of the barges, owned by PMI Shipping Company, barged into the house of Lucia Tugonon at the village of Punta. No one was hurt.

Tugonon said she and her family were inside their rooms past 10 p.m. when they heard a loud thud and the floor shook.

When they went out to check, it turned out that the barge’s bow had pierced the wall of their house.

The PCG said three vessels and a tug boat had dropped anchor in waters off the village to seek shelter from the storm.

But strong winds spawned by Ursula threw the vessels to shore.