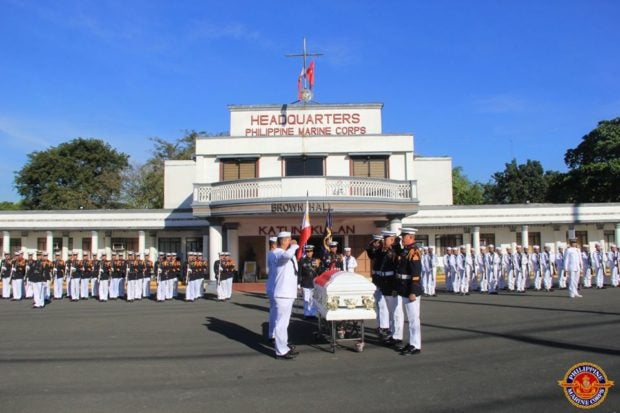 MANILA, Philippines — A Marine who lost his life during the rescue of two Indonesian hostages in Sulu has returned home.

Marines were lined up at the entrance of the Philippine Marine Headquarters in Taguig City when the remains of Sgt. Romnick Estacio arrived Tuesday.

Estacio’s grieving family members, including his wife Marijoe, also a Marine, waited to see him for the first time since he died.

“Their grief cannot be alleviated by no words. However, the appreciation of the grateful nation is more than enough for your Marines,” the Philippine Marines said in a statement.

Estacio, a member of the 62nd Marine Company, was killed in an encounter in Panamao, Sulu last December 22, while rescuing the Indonesian hostages of the Abu Sayyaf.

The military operation turned out to be a success, but he had to pay the supreme sacrifice.

Estacio fought during the Marawi City siege in 2017, the biggest urban conflict in the Philippines in recent years. He was awarded the Bronze Cross Medal, the third-highest award in combat.

The remains of Estacio were brought to his hometown in La Union on Wednesday, where it will stay for two days. He will be laid to rest in Tarlac.