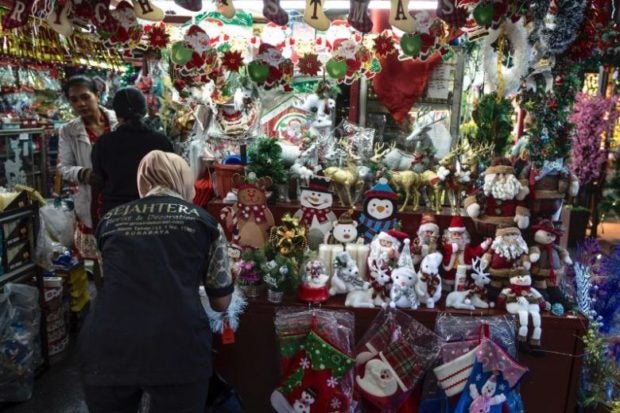 An Indonesian Muslim woman serves her customers at a Christmas decoration shop in Surabaya, Indonesia on Dec 20, 2019. In some places, Christmas celebrations are restricted. PHOTO: AFP

Neither of the two regencies – Dharmasraya and Sijunjung – has a church so Christians there will have to travel to the nearest church in Sawahlunto town, some 142 km and 40 km away, respectively.

The stance taken by these two local regency administrations in the province – where 97 percent of the population are Muslims – is against the norm in Indonesia.

In most other places like Jakarta, Christmas celebrations are allowed and – in a first – the festivities were allowed on the capital’s main streets last week, with carollers and live music.

But in some places, they are restricted, a sign of rising Islamic conservatism in Indonesia.

To further complicate matters, the country with the world’s largest Muslim population started a decentralisation drive at the turn of the century, reducing Jakarta’s control over the regions.

Since early 2000, the regulatory responsibility in Indonesia has been delegated to the regions – cities and regencies – as mandated by the 1999 decentralization law.

Pro-pluralism Wahid Foundation director Yenny Wahid said practicing any religion is a right guaranteed by the country’s Constitution, and stressed that allowing Christmas celebrations at home on the condition that guests are not invited reflects a double-standard approach by local administrations.

“This is unequal treatment (for Christians). This is clearly against our Constitution that guarantees equality,” Ms Yenny said on news portal Tempo.co. Any by-laws issued by any regency or city cannot contradict stipulations in Indonesia’s 1945 Constitution.

Ms Yenny added that practicing a religion at home and inviting guests and relatives over for religious activities are normal practices in Indonesia. She cited, as an example, Muslims who regularly hold Quran recital gatherings in private residences, attended by many guests.

There are about 22 Christian families in Dharmasraya regency, whose population was 201,000 in 2014, according to government data. Sijunjung regency has a similar demography.

The Indonesian Nationalist Students Movement (GMNI) has appealed to President Joko Widodo to intervene in West Sumatra to ensure freedom of religion.

“We strongly condemn any form of discrimination against any religion or any faith as it is against the basic spirit of the Pancasila,” GMNI chairman Imanuel Cahyadi said in a statement. Pancasila is Indonesia’s state ideology whose main principle, among others, is to respect pluralism.

Mr Hendri, head of the Religious Affairs Ministry’s West Sumatra office, said restrictions on Christmas celebrations were discussed and agreed on in a Dec 16 meeting attended by representatives of local community leaders and the inter-religion dialogue forum, among others.

“They agreed in the meeting that together, they would maintain security, order and harmony among all devotees. Christians are not banned from practising their religion, but if they do it in a group, go ahead and do it at designated places as we have agreed,” Mr Hendri, who goes by a single name, said in a statement.

Ms Yenny, however, questioned how the agreement was reached, and raised her suspicions that the Christians, likely being in the minority at the meeting, had been pressured to agree to the terms.