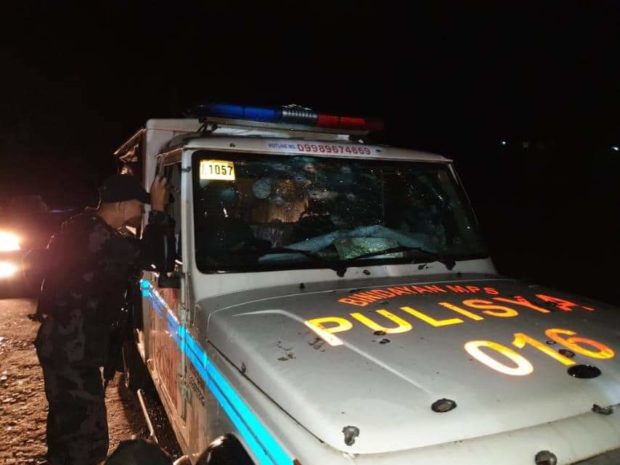 The bullet-riddled police patrol car of Binidayan Municipal Station after an ambush in Pagayawan, Lanao del Sur, past 6 p.m. on Monday (December 23). The OIC police chief and his driver died on the spot. CONTRIBUTED PHOTO. (from PPO LDS)

ILIGAN CITY –– The police chief of Binidayan town, Lanao del Sur and his driver were killed in an ambush in Sitio Banisilan, Barangay Bandaraingud, Pagayawan town past 6 p.m. on Monday, December 23.

Lanao del Sur police director Col. Madzgani Mukaram said Executive Master Sergeant Amen Lucman Macalangan was with police personnel on their way to Binidayan, when waylaid and ambushed along the national highway, according to Lt. Col. Ian Noel Ignes, commander of the Army’s 55th Infantry Battalion operating in the area.

The ambush area was only 200 meters from the community center and 400 to 500 meters away from the detachment of the Citizen Armed Forces Geographical Unit.

Macalangan assumed as police chief officer-in-charge just a month ago.

Mukaram said the police chief and his men came from a weekly oversight meeting at the provincial police headquarters in Marawi City.

Aside from Macalangan, the driver Ramel Pangcatan, a member of the Barangay Peacekeeping Action Team, who is a resident of Binidayan, also died from the attack.

Ignes said Macalangan, a resident of Bayang town, had sought military help a few days after he was named OIC of Binidayan police because of threats that his police station would be harassed because of the smuggled cigarettes and illegal logs that the police had confiscated in the area.

Mukaram said they were pursuing the owner of the confiscated smuggled cigarettes as the person of interest in the case.