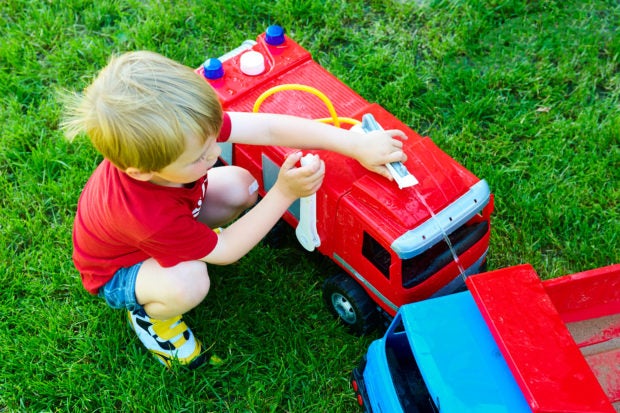 A three-year-old boy became an unlikely hero when he braved a busy road on his toy truck, to find help for his dad who suffered a seizure in their home in Lincolnshire, England.

Stefan Snowden rode his toy fire truck for more than 290 meters to get help for his dad Marc since they lived away from a main road, as per Daily Mail last Wednesday, Dec. 18. He later made his way to the busy road with cars swerving around him.

“The little boy was just trundling along the main road towards Bourne,” a witness told the newspaper. “There were three or four cars behind him, but he was so low another impatient motorist overtook the line of traffic.”

“Then a woman stopped her van and parked it across the road to rescue him,” the onlooker added. “‘She was very brave.’”

Another woman who witnessed Stefan being rescued off the road also decided to help the boy. She took him into her home and called police while the two strangers tried to find the child’s family.

The two women located Stefan’s home after neighbors helped them go door to door. When they arrived at the boy’s home, his mom Carla Neve was waiting for an ambulance for Marc. As per report, the parents were unaware that Stefan went missing.

Neve, who was not at home when Marc suffered the seizure, explained how Stefan managed to get on the busy road. She said that her son knew how to get out of the front door, so he must have gone for his toy truck when his dad experienced a seizure on their couch.

Neve also stated that Marc suffers from epilepsy and loses consciousness when he has a seizure.

“He was definitely going for help,” she said in the report. “When we spoke to the police Stefan said ‘Daddy was poorly.’”

Marc also expressed how proud he was of his son, and extended his gratitude to the two women who helped Stefan. According to the report, a police officer stated that Marc was “doing fine” after the incident. Ryan Arcadio/JB