HONG KONG — The Hong Kong seller of luxury watches looked on in horror as masked men wielding the biggest sledgehammer he’d ever seen smashed through the door of a neighboring watch store, held a machete to the owner’s throat, scooped up hundreds of thousands of dollars worth of timepieces, and then scattered into the city’s maze of streets.

Among them was the watch seller who had witnessed the previous robbery. He says he grabbed an iron pipe he had handy for just such a confrontation and sprinted out to join the battle against the robbers who were smashing the front of Past & Future Times with hammers, trying to get to the store’s high-end watches, while other gangsters brandishing machetes formed a menacing shield around them. 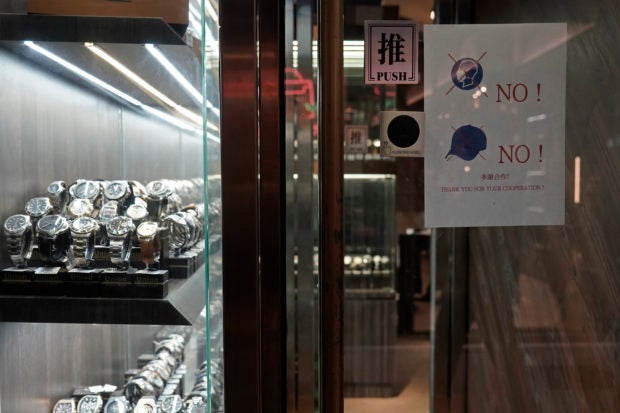 In this Wednesday, Dec. 18, 2019, photo, a notice is attached to the front door demanding no hats and masks allowed in the watch store to help prevent robberies after the shop was attacked by armed robbers recently in Mongkok, a shopping district of Hong Kong. Sellers of luxury goods that are easily peddled by thieves have become targets for armed robbery gangs during the pro-democracy protests that have been gripping Hong Kong. (AP Photo/Kin Cheung)

“I heard ‘Boom! Boom! Boom!’ People shouting,” said the merchant, who asked that he be identified only by his surname, Pan, because he feared for his safety. So much so that he now keeps a large meat cleaver in the drawer of his front desk and has protected his store with a new double door and toughened glass.

The robbers came at the merchants with their knives and then, seemingly scared off, ran away, he said.

“All the shops came out to help. We’re very united now,” Pan said.

They have to be. Hong Kong’s 30,000-strong police force has been so stretched by a half year of anti-government protests that it is struggling to keep the peace. Armed robbers and burglars are seemingly exploiting policing vacuums caused, in part, by the redeployment of officers to riot-control duties. Police said the proud reputation of the semi-autonomous Chinese territory of 7.5 million people as an Asian haven of tranquility, with crime rates lower than other cities its size, is being eroded.

“We used to be a very safe city, six months ago, but somehow we face a lot of challenges,” said Chief Superintendent Kwok Ka-chuen, a spokesman for the police force.

But the mass demonstrations that erupted in June over proposed extradition legislation and then mushroomed into a sustained anti-government movement pushing for full democracy and other demands have burned through police manpower. 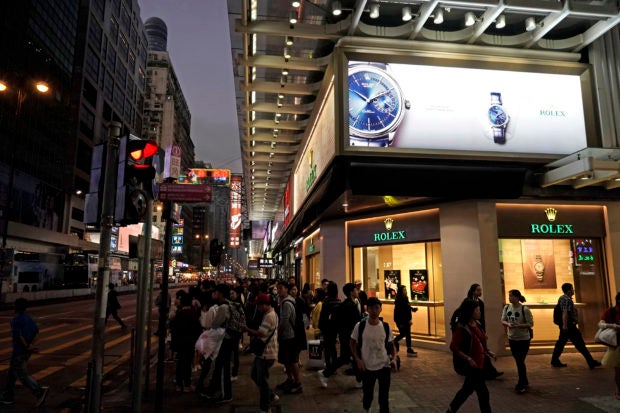 In this Wednesday, Dec. 18, 2019, photo, people walk past a luxury watch shop on the main street in Mongkok, a shopping district of Hong Kong. Sellers of luxury goods that are easily peddled by thieves have become targets for armed robbery gangs during the pro-democracy protests that have been gripping Hong Kong. (AP Photo/Kin Cheung)

May Chan said police patrols that used to walk the beat, morning and afternoon, past the Times watch store in Kowloon, where she sells timepieces for tens of thousands of dollars, stopped abruptly in August, after the protest movement picked up steam and radicalized. It was also around that time that a man brandishing a knife burst into her store, cowing Chan’s colleague into submission before making off with about $130,000 in watches, she says.

“It’s the protests,” Chan said. “It has become dangerous. The police no longer come out. They don’t have enough people.”

The latest police figures appear to bear out the suspicions of store owners in Kowloon — where riot squads and demonstrators have repeatedly clashed on canyon-like streets of high rises — that Hong Kong is experiencing a protest-related crime wave.

In the first half of the year, police recorded just 44 robberies — or about one every four days. But the number soared to 126, closer to one robbery per day, from July to November as the protests and related violence increasingly stretched the force. When compared to the same period of 2018, robberies increased by 147%. Burglaries also increased in the past five protest-gripped months, to 1,270, or eight per day, double the number for the same period of 2018.

Some protesters suspect police are turning a blind eye to robberies to reinforce Hong Kong government arguments that protests are damaging the city. That charge is denied by Kwok, the police spokesman. But trust in the force among supporters of the protest movement has largely evaporated in the clashes, in which police have used 26,000 tear gas and rubber-bullet rounds and made more than 6,100 arrests.

On a recent peaceful day with no mass protests, timepiece seller Jan Leung said she does not understand why she’s still seeing no police patrols on her Kowloon street even after two nearby robberies, including the Po Tat watch store earlier this month. Video posted online showed a masked robber stuffing a bag with the loot while another stood guard with a machete.

“It’s so peaceful now. There is nothing happening. But there is still no police,” Leung said. “Saying the police are busy at protests … it’s [just] excuses.”

Police said officers are patrolling instead in vehicles and that foot patrols have been scaled back in part to protect them from violent protesters. Police also said that because protesters deliberately seek to avoid riot squads by popping up out of the blue, and because demonstrations have been so widespread, the force has had to set aside reserves of manpower to quickly respond to any unexpected violence, further directing resources away from day-to-day crime.]

Pan, the watch seller, said police patrols are resuming again in his repeatedly robbed area of Kowloon, but in larger squads of around a half dozen officers because they fear being “hit with a petrol bomb or a brick.”

And if robbers do come back, the watch merchants are ready. They’re hiring private security and have set up an alarm system so they can alert each other if attacked, he said.

“We’re all armed with weapons,” he said. “I never believed it would happen in Hong Kong.”