Signal No. 1 up in 11 areas as 'Ursula' landfall expected in Eastern Visayas | Inquirer News

Signal No. 1 up in 11 areas as ‘Ursula’ landfall expected in Eastern Visayas 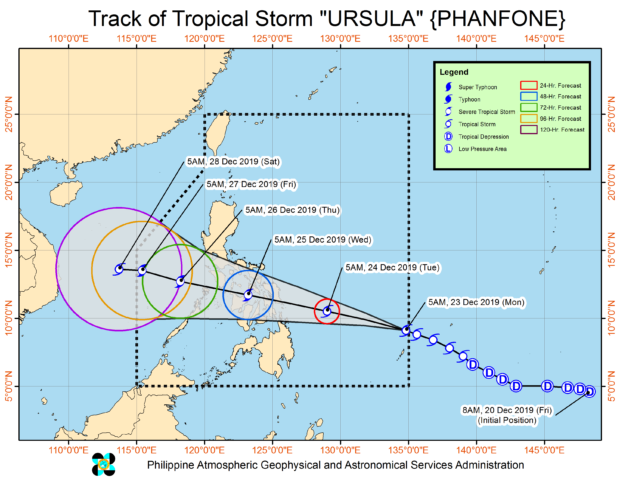 According to the state weather bureau, Ursula was last spotted at 900 kilometers east of Hinatuan, Surigao del Sur.

Ursula packs maximum sustained winds of 65 kilometers per hour (kph) near the center and gustiness of up to 80 kph.

The tropical storm was also monitored moving west-northwest at 25 kph.

Pagasa said that before it makes landfall over Eastern Visayas either Tuesday afternoon or evening, Ursula may further intensify into a severe tropical storm.

Light to moderate with intermittent heavy rains, meanwhile, are expected in Quezon province and the rest of Visayas, Bicol region and Surigao del Norte.