Times Square characters head to Rock Center for the holidays

NEW YORK – Visitors headed for  Times Square have long been bedazzled by thick crowds, bright lights, and a cadre of costumed characters who sidle up to tourists, pose with them for pictures, then persistently pressure them for tips. 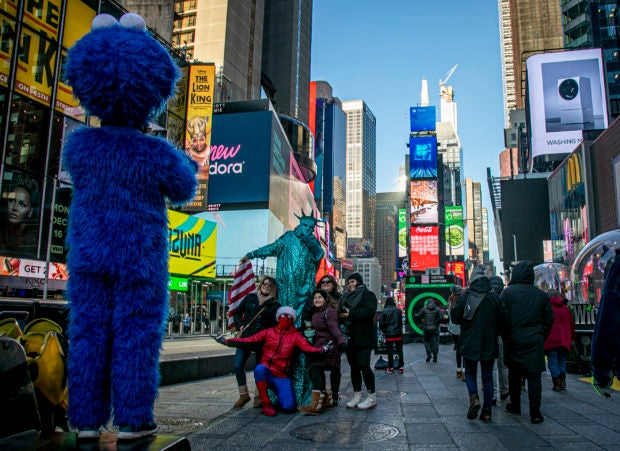 In this Thursday, Dec. 19, 2019 photo, people snap pictures with familiar costumed characters, who solicit money to perform for the photos in Times Square in New York. Complaints about the sometimes aggressive behavior of the performers prompted the city in 2016 to passed a law relegating the Times Square characters to 8-by-50 foot “activity zones” where they might annoy fewer people. (AP Photo/Bebeto Matthews)

Complaints about the sometimes aggressive behavior of the performers prompted the city in 2016 to pass a law relegating the Times Square characters to 8-by-50 foot “activity zones” where they might annoy fewer people.

Now, with the holiday season in full swing, some of the costumed superheroes, Muppets and Disney characters have headed to the equally crowded environs around Rockefeller Center and its iconic Christmas tree.

The scene on a recent weekend was a familiar one, though absent the activity zones that keep the characters penned in.

“All right, smile,” one dad said as he snapped a picture of his two girls standing with Minnie and Mickey Mouse on Fifth Avenue.

After he pulled out his wallet and handed over a few dollar bills, he was greeted by grumbling from Mickey that this wasn’t enough, because there were two characters in his picture, not one.

Ed Saverino, of New Jersey, brushed by the characters on his way to see the tree as someone else politely declined a photo opportunity.

“I’m from around here,” Saverino said. “So I know the deal. These guys are predatory. If you wanna take pictures with people, then let them come to you. Don’t go running up to people and touching them.”

After a Times Square Elmo was arrested in September for grabbing a 14-year-old girl’s buttocks as she posed for a photo with him, Mayor Bill De Blasio promised stricter enforcement to ensure harassment wouldn’t happen again, but didn’t outline how he’d do so.

On a recent Sunday, three Minnie Mouses and one Mickey Mouse character roamed the sidewalks outside Rockefeller Center. Each politely declined to be interviewed.

Some passersby defended them as harmless and fun.

“I work down here, right by Rockefeller Center, and I think they should be allowed to take pictures wherever they want,” said Jen Radin, who was accompanied by her son and daughter. “Maybe not during the week because it forms crowds, and it’s already hard enough to walk around here. But on the weekends, I don’t see a problem.”

She turned around to see the Minnie Mouses gathered around a little girl. “It’s nice,” she said. “Plus the ones down here have nothing on the ones in Times Square. They’re ruthless over there. Here, they’re much more polite and respectful.”

“I know the kids love it,” another parent, Starr Grill, who was visiting from Maryland, said after her 11-year-old daughter posed with Mickey and Minnie. “It’s all a part of that New York charm. It’s what you come here for, really. Because it’s true that no other city compares.”

Unlike Times Square, Rockefeller Center is a privately owned space whose owners have the right to regulate what vendors and performers can operate and solicit money in the complex of art deco office buildings, retail space, arcades and outdoor public plazas.

That has tended to push the costumed characters a little farther from the action. Police have also been cracking down since the New York Post wrote  this month about the drift of the characters to Rockefeller Center.

A performer dressed as the Grinch was issued a summons Dec. 12, accusing him of getting in the way of pedestrians on the packed sidewalk. Other summonses were issued to men dressed as Spider-Man and Captain America.

Valerie Khezri, another visitor to the Rockefeller Center tree, said the city was right to crack down.

“I was in Times Square, and an Avatar totally shook me down,” she said. “They’re standing in front of you with their hands out and don’t stop until you give them what they deem is enough money. Total thieves!”