“It started with just one pig. Then three, then 10, until all of them died within days,” says Cristina Baynosa, a backyard piggery owner
By: Maricar Cinco - Reporter / @maricarcincoINQ
Philippine Daily Inquirer / 04:54 AM December 23, 2019 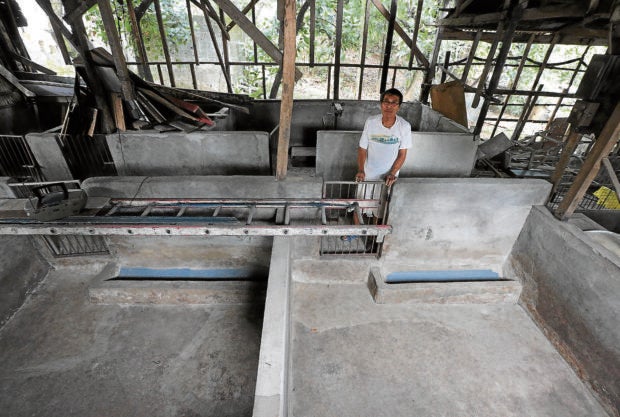 RODRIGUEZ, Rizal, Philippines — At 38, Cristina Baynosa is living in her “dream home” on a cliff here.

She likened her family’s dwelling in Barangay San Isidro to a villa with a view of the surrounding mountains and the skyline of Metro Manila. Except that hers sits atop a ravine covered in trash, the stench constantly pulling her back to a filthy reality.

Baynosa and her family moved here from Cavite province just two years ago, when her husband got a job as a pahinante (garbage truck helper).

Two skinny but aggressive dogs guard her house, which is precariously perched on stilts and salvaged plywood sheets. Next to it is an empty pigpen that, not too long ago, held 42 pigs that perished along with Baynosa’s hopes of putting her seven children through school.

“It started with just one pig. Then three, then 10, until all of them died within days,” she recalled.

Pigs were a common household feature in San Isidro, many in informal settlements near the sanitary landfill in the town of Rodriguez. While most people relied for their daily upkeep as palero (scavengers) in the dump or workers in nearby junk shops, they found extra albeit slow income from small-scale hog-raising.

The smell of garbage overpowered every other odor in the community so that nobody minded another stinking pigsty. And there was a steady supply of swill from leftover food that provided a cheaper alternative to animal feed.

Baynosa’s family borrowed money to buy the breeding stock, only to lose them even before the sows could farrow.

“My children have stopped going to school and we don’t know how we can pay our debts. Maybe we should just move back to the province,” she said.Ground zero

Baynosa had no idea what hit her family until the Department of Agriculture (DA) confirmed in September the presence of the African swine fever (ASF) in the Philippines.

By then, hundreds of millions of pigs across Asia had died or were culled due to the disease that is fatal to pigs and wild boars but not to humans.

The agribusiness bank Rabobank estimated that the disease had cut by half the pig population of China, the world’s biggest pork producer and consumer. The Organization for Animal Health said a quarter of the world’s hog population is expected to die as a result of the epidemic.

ASF’s adverse impact has driven hog producers and traders in China to smuggle some of their products to other countries, the Philippines included, in an effort to trim their losses.

It was tainted pork from China that triggered the first case of ASF in the province of Rizal, according to Agriculture Secretary William Dar.

The DA traced early symptoms of ASF, like high fever, loss of appetite, and blotchy skin lesions, to pigs in backyard farms in San Isidro as early as July 25.

The Bureau of Animal Industry confirmed the virus in Rizal, but the national government had to wait for the findings of the Pirbright Institute, the reference laboratory of the World Organization for Animal Health in the United Kingdom.

“When [ASF] broke out in China and Vietnam, we knew the likelihood of it reaching [the Philippines] was high. Definitely we were alarmed. It’s a very deadly virus,” said Arnel de Mesa, DA regional director in Calabarzon (Cavite, Laguna, Batangas, Rizal and Quezon).

The virus infected backyard and commercial pig farms in six Luzon provinces and Metro Manila, prompting the government to cull 136,770 pigs as of Nov. 30.

In Rodriguez alone, the virus’ ground zero, about 8,000 pigs were culled to stop the spread of ASF.

But it was the likes of Baynosa who felt the full impact of the ASF crisis.

To contain the virus, the government seized even healthy pigs within one kilometer of the affected areas. The pigs were shot with stun guns and the carcasses buried in 15- to 20-foot-deep pits with disinfectants, apog (lime powder), and soil.

In Quezon City, culling was done by lethal injection. In Dasmariñas City, Cavite, the pigs were buried in a mass grave in a public cemetery.

Baynosa buried hers in her backyard, even before the government offered indemnity and loans to hog growers like herself. Others in her neighborhood dumped dead pigs in rivers and creeks; the carcasses later turned up in Metro Manila’s waterways.

Baynosa got nothing in compensation because the government paid only for live pigs “surrendered” for culling. (The payment was P3,000, which was later raised to P5,000 regardless of the pigs’ age and weight. Some local governments gave an additional P4,000.)

In November, the government approved the release of P221 million as part of the P1-billion contingency fund for affected hog raisers.

Lorenzo Acosta Jr., 69, a hog raiser from Rodriguez, gave up all his 25 pigs for culling rather than risk losing them to ASF and ending up empty-handed.

But another resident, who asked not to be named in this report, kept her four pigs—each named after her own children—insisting that they were perfectly fine.

“I prefer to have my family eat [the pork] than sell to the government at a low price,” she said. “We roasted a pig for a family occasion and we’re saving the rest for the Christmas holidays.”

Earlier, when pigs were just starting to fall ill, traders from Rodriguez sold them cheap at Pritil, a village that has become a trading hub in Bulacan province, which shares boundaries with Rizal and Quezon City.

Nobody suspected they were spreading the virus until it hit the larger hog populations in Bulacan and the provinces of Pampanga and Nueva Ecija, all the way up north to Pangasinan.

While it was difficult to trace the culprit, experts believe the virus followed the garbage trail from Metro Manila to the Rodriguez landfill. It could have been a tourist from an ASF-infected country or a restaurant that imported contaminated pork; either way, the leftover food ended up as swill.

Tess Ancajas, 55, a caretaker in a junk shop in Rodriguez, said they used to sell two to three sacks of swill a day, and sometimes 20 sacks a week to hog raisers in Antipolo City and San Mateo, both in Rizal.

Scavengers collected food waste and weeded out the bones, glass shards, and other nonfood objects. The swill is then packed in rice sacks and sold like vegetables on the bangketa (sidewalk) for P120 to P150—about 12 times cheaper than animal feed.

In other neighborhoods where hog raising is prevalent, food scraps are given away.

Cultural, economic issueThe Philippine Association of Meat Processors Inc. said the unchecked practice of swill feeding continued to be prevalent even in cities where there shouldn’t be any livestock operations in the first place.

“It’s both a cultural and economic thing,” said Dr. Teodoro Rosales, chief veterinarian of Caloocan City. “The cost of production is high. About 60 percent of expenses goes to [animal] feed. That means raisers are able to save that much when they use food scraps to feed their pigs, and this has been the practice for so long.”

Rosales added: “Under the Food Safety Act, swill feeding is not really allowed because it’s hard to trace where the food scraps are coming from, even when leftovers are from your neighbors. This is hard to monitor, however, especially when the practice is tolerated by the community and the barangay.”

Leoncio Tasis, 68, used to collect his neighbors’ leftover food in Barangay Emmanuel Bergado 1 to feed 31 pigs that he kept in a narrow and poorly ventilated building where he and a nephew lived. When the pigs died, Tasis buried them under the floor of the very room he slept in.

Rosendo So, chair of the Samahang Industriya ng Agrikultura, said his group had been making the rounds to advocate the use of commercial feed to promote better production practices, but was often met with criticism.

“When we go around the provinces to urge hog raisers to switch to using commercial feeds, they are cynical. They think it’s some sort of marketing ploy, so they refuse,” he said. “Only when their hogs are affected that they decide to follow us, but by that time it’s too late.”—With a report from Karl R. Ocampo