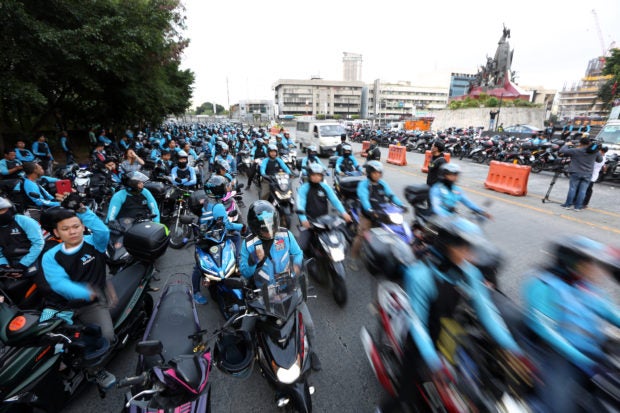 MANILA, Philippines — The labor group Partido ng Manggagawa on Sunday urged the Land Transportation Franchising and Regulatory Board (LTFRB) to withdraw its decision to reduce the number of drivers for the motorcycle-ride-hailing company Angkas from 27,000 to 10,000 by January.

“Almost 20,000 Angkas [drivers] are facing a sad Christmas and a bleak new year,” Wilson Fortaleza, spokesperson for the group, said in a statement. “Fostering competition in the motorcycle taxi sector is good but it should not lead to massive dislocation of [drivers].”

Senate President Pro Tempore Ralph Recto also criticized the LTFRB decision, saying it was the “saddest Christmas gift” the government could ever give.

“The gift of unemployment is the most heartless of all, the worst Christmas bonus, one that even Scrooge will not even dare think of,” Recto said.

Bayan Muna Rep. Ferdinand Gaite also disapproved of the LTFRB decision, saying “the Grinches” in the agency “just stole the cheer of Christmas” from thousands of Angkas drivers.

More than 20,000 Angkas drivers staged a rally at the People Power Monument on Edsa in Quezon City on Sunday to protest the LTFRB decision to cut the company’s capacity and allow two other motorcycle groups, JoyRide and MoveIt, to participate in the safety test of motorcycles as taxis.

George Royeca, a spokesperson for Angkas, said the government’s decision would only encourage the proliferation of “habal-habal,” unauthorized motorcycles offering taxi service to commuters who want to beat traffic on Metro Manila’s heavily congested roads.

On Saturday, the technical working group formed to study whether it was safe to use motorcycles as taxis denied that its decision would result in 17,000 Angkas drivers losing their jobs.

It said it actually expected the number of drivers in the streets to increase to 39,000 because of the addition of JoyRide and MoveIt to the safety test.

In a statement, Antonio Gardiola Jr., head of the group, accused Angkas of spreading false statements through social media.

The statement, however, did not say whether JoyRide and MoveIt would be made to take in Angkas drivers who would be taken off the road.—Reports from Tina G. Santos, Julie M. Aurelio, Matthew Reysio-Cruz and DJ Yap