CAPE CANAVERAL, Fla.  – Boeing aimed to bring its Starliner crew capsule back to Earth on Sunday to end its first test flight, a mission cut short by an improperly set clock on the spacecraft. 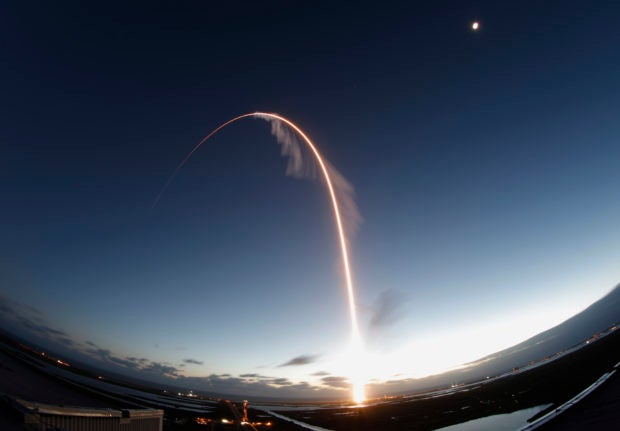 In this long exposure photo, the United Launch Alliance Atlas V rocket carrying the Boeing Starliner crew capsule lifts off on an orbital flight test to the International Space Station from Space Launch Complex 41 at Cape Canaveral Air Force station, Friday, Dec. 20, 2019, in Cape Canaveral, Fla. Boeing’s new capsule ended up in the wrong orbit after lifting off on its first test flight Friday, a blow to the company’s effort to launch astronauts for NASA next year. (AP Photo/Terry Renna)

The Starliner — carrying no astronauts, only a test dummy — was supposed to spend the coming week at the International Space Station, part of a critical dress rehearsal for a flight with a real crew next year.

But the capsule ended up in the wrong orbit shortly after launching Friday. The station docking was scrapped, and Boeing and NASA decided to bring the spacecraft home as soon as possible.

Flight controllers worked toward a predawn touchdown in the New Mexico desert, the original landing site but six days earlier than expected. Boeing and NASA teams were in place at the Army’s White Sands Missile Range, after rushing there from Florida following liftoff.

After about 50 hours aloft, the Starliner was going to fly over Mexico’s Baja Peninsula, across northern Mexico and then west of El Paso, Texas, into New Mexico for a touchdown.

The orbital demonstration was supposed to be Boeing’s chance to catch up with SpaceX, which completed a similar flight test last March. NASA hired the two companies five years ago to transport its astronauts to and from the space station, in the wake of the shuttles’ retirement. Technical problems and delays kept delaying the commercial crew flights.

Jim Chilton, a senior vice president for Boeing, said Saturday that the timing problem in the Starliner’s automated system has since been corrected and that the re-entry and landing systems have checked out well. For unknown reasons, the Starliner’s clock did not sync up properly with the timing on the Atlas V rocket that launched the capsule.

The Starliner burned excess fuel trying to orient itself in orbit. Flight controllers tried sending commands to fix the problem, but the capsule was in a bad position to receive them and there was also a gap in communication coverage . By then it was too late, and there wasn’t enough on-board fuel to permit a space station visit.

The capsule is healthy and performing well now, Chilton assured reporters. “But make no mistake, We still have something to prove here on entry,” he said.

During a launch abort test last month in New Mexico, only two of Starliner’s three main parachutes deployed because of a rigging mistake. A pin wasn’t in its proper place. Chilton said workers verified the rigging for this Starliner, and NASA checked photos to make certain.

NASA Administrator Jim Bridenstine said the upcoming landing was a major objective for Starliner, and everybody needed to be on their “A game.”

“Certainly, there’s going to be a lot of data that needs to be reviewed when this is over,” Bridenstine said.

NASA has yet to decide whether Boeing will need to conduct another orbital test flight — and actually dock with the space station — before putting crews on board. Before this flight went bad, the company had been planning for its first astronaut flight by summer.

SpaceX, meanwhile, is shooting for its first launch with NASA astronauts by spring.

“Orbit is hard,” SpaceX founder and chief executive Elon Musk said in a tweet to Boeing. “Best wishes for landing & swift recovery to next mission.”