Pope Francis denounces ‘rigidity’ as he warns of Christian decline 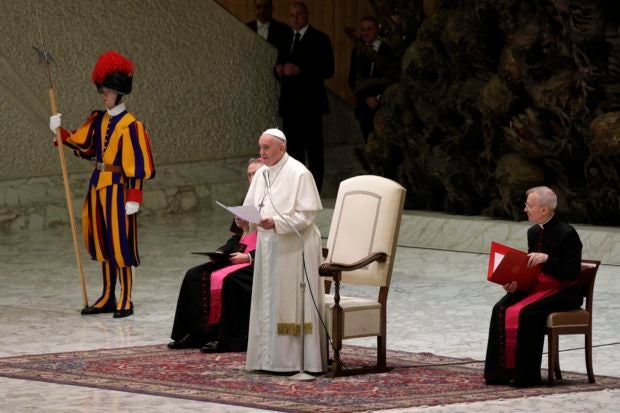 Pope Francis delivers his message on the occasion of his Christmas greetings to Vatican employees, in Pope Paul VI Hall, at the Vatican, Saturday, Dec. 21, 2019. (AP Photo/Andrew Medichini)

VATICAN CITY  — Pope Francis warned Saturday that “rigidity” in living out the Christian faith is creating a “minefield” of hatred and misunderstanding in a world where Christianity is increasingly irrelevant.

Pope Francis called for Vatican bureaucrats to instead embrace change during his annual Christmas greetings to the cardinals, bishops, and priests who work in the Holy See.

The Pope’s message appeared aimed at the conservative and traditionalist Catholics, including within the Vatican Curia, who have voiced increasing opposition to his progressive-minded papacy. Their criticisms have accelerated over the past year, amid Vatican financial and sex abuse scandals that may have predated Francis’ papacy but are nevertheless coming to light now.

Pope Francis issued a stark reality check to the men in the Sala Clementina of the Apostolic Palace, acknowledging that Christianity no longer holds the commanding presence and influence in society that it once did.

He cited the late Cardinal Carlo Maria Martini, a leader of the progressive wing of the Catholic Church, who in his final interview before dying in 2012 lamented that the church found itself “200 years behind” because of its inbred fear of change.

“Today we are no longer the only ones that produce culture, no longer the first nor the most listened to,” Pope Francis told the prelates. “The faith in Europe and in much of the West is no longer an obvious presumption but is often denied, derided, marginalized, and ridiculed.”

As a result, he urged the Catholic hierarchy to embrace the necessary pastoral reforms and outlook that will make the church attractive so that it can fulfill its mission to spread the faith.

“Here we have to beware of the temptation of assuming a rigid outlook,” Pope Francis said. “Rigidity that is born from fear of change and ends up disseminating stakes and obstacles in the ground of the common good, turning it into a minefield of misunderstanding and hatred.”

He recalled – as he has in the past, that people who take rigid positions are usually using them to mask their own problems, scandals or “imbalances.”

“Rigidity and imbalance fuel one another in a vicious circle,” he said. “And these days, the temptation to rigidity has become so apparent.”

Traditionalist Catholics have denounced Pope Francis’ emphasis on mercy and openness to doctrinal wiggle room on issues such as sacraments for divorced and civilly remarried Catholics. They also sharply criticized his recent synod on the Amazon, which called for the ordination of married men as priests, and what they considered pagan worship of an Amazonian statue of a pregnant woman that was featured during the meeting.

Pope Francis has defended his outlook and priorities as a reflection of the Gospel, and the axiom that the true tradition of the church is one of a continuous discerned path of change.

“Tradition is not static, it’s dynamic,” he said Saturday.

In a tangible sign of change, Pope Francis issued a new decree Saturday limiting the term of the dean of the College of Cardinals, an influential job that had previously been held for life. Pope Francis accepted the resignation of the current dean, Cardinal Angelo Sodano, and decreed that going forward, the future top cardinal would only have a five-year renewable term.

Sodano had been the powerful secretary of state under St. John Paul II and was blamed in part for the Vatican’s refusal to crack down on pedophile priests, including the notorious Rev. Marcial Maciel. Sodano, 92, continued to wield behind-the-scenes influence in the two papacies that followed, acting most recently as something of a beacon for conservative opposition to Pope Francis.

As dean, Sodano delivered his final Christmas greeting to Pope Francis on Saturday.