Duterte firm he won’t honor ICC: Only Filipinos can judge me 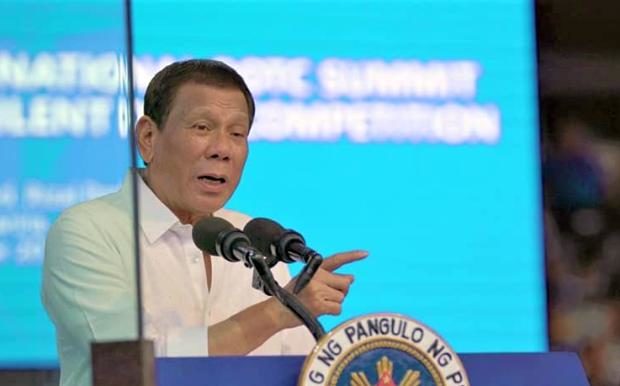 MANILA, Philippines — President Rodrigo Duterte reiterated Friday that he will “never” allow the International Criminal Court (ICC) to take jurisdiction over him, stressing that he is “only responsible to Filipinos.”

“You do not scare me na pakulong mo ako diyan sa (that you can jail me in that) International Court — Criminal Court. T***… I will never allow myself to answer itong mga puti (these foreigners),” Duterte said in his speech at the first Presidential Silent Drill Competition.

“Hoy, loko-loko kayong mga (You crazy foreigners)… I will never, never, never answer any question coming from you. It’s b*** s*** to me. I am responsible only to the Filipino. Ang maghusga, Filipino (only Filipinos can judge me). And if you hang me for what I did, go ahead. It will be my pleasure,” he added.

Earlier this month, ICC said it aims to conclude its preliminary examination on Duterte’s drug war by 2020 to see if there is a need for a full-blown investigation into the brutal campaign against illegal drugs.

Duterte has made the war on drugs the focal point of his administration. He has been harshly criticized for it with critics claiming it has killed as much as 27,000 individuals. However, the government said that only 5,500 drug suspects were killed in anti-drug operations.

ICC’s preliminary examination stemmed from a complaint filed by lawyer Jude Sabio in April 2017, which accused the Duterte administration of committing crimes against humanity for the alleged extrajudicial killings in the guise of the controversial crackdown on illegal drugs.

Eventually, the Philippines, through Duterte’s order, withdrew its ratification of the Rome Statute, which created ICC.

But ICC maintained it still has jurisdiction over cases that fall within the country’s stay in the Statute, which started in 2011.