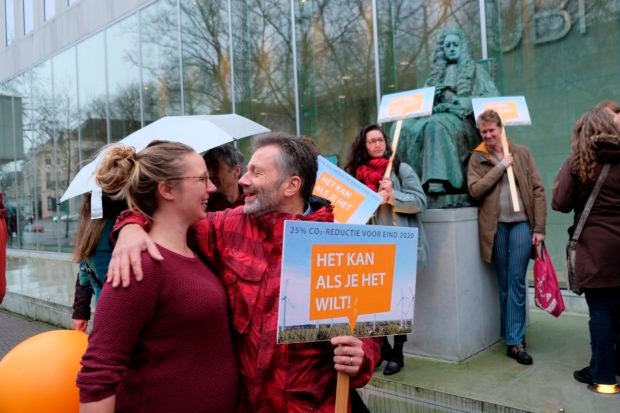 Climate activists gather outside the Supreme Court of the Netherlands, The Hague, on Friday, Dec. 20, 2019, ahead of a ruling in a landmark case in which the government was ordered to slash greenhouse gas emissions by 25% by 2020. The government appealed saying that the ruling effectively meant that courts were setting government policy. (AP Photo/Mike Corder)

THE HAGUE, Netherlands — Climate activists won a final victory Friday in their long-running battle through Dutch courts to force the government to cut greenhouse gas emissions.

The country’s highest court upheld two earlier rulings ordering the government to cut emissions by at least 25% by the end of 2020 from benchmark 1990 levels.

Activists in the packed courtroom clapped and cheered as Presiding Judge Kees Streefkerk said the court had rejected the government’s appeal.

It is now more than four years since a court in The Hague first ordered the emissions cut in a case brought by climate group Urgenda that spawned similar legal challenges elsewhere in the world.

The government appealed that verdict, saying that courts shouldn’t be able to order the government to take action. The government lost the appeal in October 2018, but appealed again, this time to the Supreme Court. Friday’s ruling rejected that appeal.

In the meantime, the Netherlands is approaching the target.

A report by the country’s Environmental Assessment Agency published last month estimated that greenhouse gas emissions in 2020 would be about 23% lower than 1990 levels. The agency said that the reduction could be anywhere from 19%-26%.

Scientists say global emissions of carbon dioxide and other pollutants have to start falling rapidly as soon as possible to meet the Paris goal of keeping global warming by the end of the century well below 2 degrees Celsius (3.6 Fahrenheit), and ideally 1.5 degrees Celsius (2.7 F).