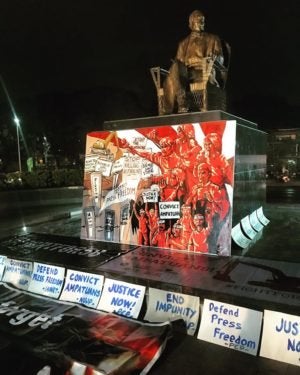 The Concerned Artists of the Philippines (CAP) criticized the police for allegedly seizing the artwork they were supposed to use as a backdrop for a public vigil for the Maguindanao massacre victims.

MANILA, Philippines — The National Capital Region Police Office (NCRPO) on Friday chided an artists’ group over its artwork for the Maguindanao massacre victims that police allegedly confiscated ahead of the promulgation on the case on Thursday.

This, after the Concerned Artists of the Philippines (CAP) criticized the police for allegedly seizing the artwork they were supposed to use as a backdrop for a public vigil for massacre victims outside Camp Bagong Diwa in Taguig City where the promulgation was held.

While he did not confirm if the artwork, commissioned by the National Union of Journalists in the Philippines, was indeed confiscated, NCRPO acting director Brig. Gen. Debold Sinas said they have banned the use of placards and similar items in protests near the police camp.

(We already agreed with both parties that if possible, they should not use placards to not agitate emotions. Because if you agitate the feelings of both parties, it will be hard to secure [the area].)

CAP called the supposed confiscation as “harassment” and “an act which curtails freedom of information and assembly.”

But for Sinas, security remains the top priority.

“[It was] harassment on their side, in their opinion. We can always cry for harassment. Pagdating sa (But in terms of) security we have to respect [it], kasi (because) we made an agreement.

“Ilang beses na kaming nagdialogue and yet meron pa rin nagba-violate (We held a dialogue for a lot of times and yet some still violate the agreement). It’s for everyone. I think the expression on your end should not jeopardize the security,” he also said.