Conviction in Maguindanao massacre case a step to right direction–CEGP 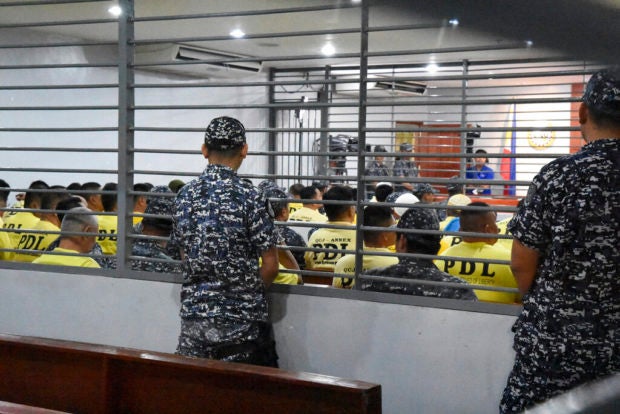 Jail guards stand next to a crowd of accused waiting the promulgation at the trial venue inside a prison facility at Camp Bagong Diwa in Taguig City. SC-PIO via AP

MANILA, Philippines – The conviction of the accused in Maguindanao massacre case is a step in the right direction even if impunity in the whole Philippines is supposedly worsening, campus journalism group College Editors Guild of the Philippines (CEGP) said.

“The conditions which paved way for the brutal Ampatuan massacre continue to exist especially with the worsening culture of impunity in the country,” CEGP National President Daryl Angelo Baybado said in a statement on Thursday, moments after the Quezon City Regional Trial Court released its decision.

“Today we are a step ahead in our fight against impunity with the guilty verdict,” he added.

According to Baybado, the conviction of several Ampatuan clan members and police officers who plotted and executed the killing of 57 victims in 2009 is a strong message to potential abusers, that no crime goes unpunished.

“Today we join the families of the victims and the Filipino people triumph of justice. In our country bereft of it for too long, may the verdict send a message to everyone that the oppressed can fight, stand and triumph against those who abuse their powers,” he explained.

The infamous incident happened while relatives of then Buluan town mayor Esmael “Toto” Mangudadatu were on their way to file his certificate of candidacy for the 2010 national elections.  Mangudadatu was seeking to end the Ampatuan clan’s grip on Maguindanao’s gubernatorial post.

The relatives, including Mangudadatu’s wife, was accompanied by media personalities.  However, they were ambushed along the highway at Sitio Masalay, leading to the deaths of 57 individuals, including 31 journalists.

All are sentenced to suffer the penalty of reclusion perpetua or up to 40 years of imprisonment.

Other still at-large suspects,  about 80 of them, have been ordered arrested by the court.  Meanwhile, other suspects Sajid Islam Ampatuan, Datu Akmad Tato Ampatuan, and Jimmy Ampatuan were acquitted due to reasonable doubt.

The CEGP cited various local and international groups for pushing towards the resolution of the case, while echoing the call for accountability for alleged human rights violations under the current administration.

“The long-awaited bittersweet decision is the result of hard work and dedication of all the victims’ families and press freedom fighters, all in the pursuit of truth and justice,” CEGP said.

“The Guild vows to continue the call for justice for all the victims of impunity and the intensifying fascism under the very desperate Duterte administration. The conviction for the Ampatuan massacre perpetrators is an example of how the Filipino people will fight for justice for all state-perpetrated violence and ultimately, to end impunity,” it added.