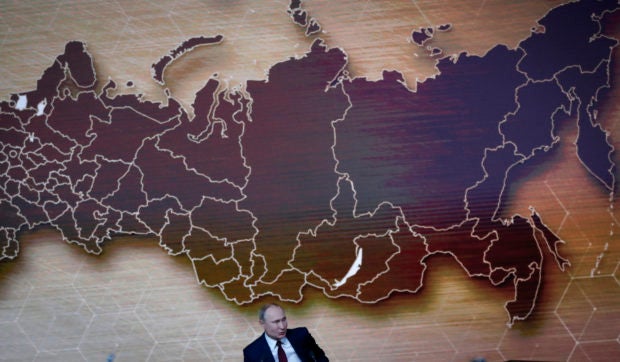 MOSCOW — Russian President Vladimir Putin on Thursday said “nobody knows” what causes climate change, seeming to cast doubt over whether global warming is of manmade origin and stating it could be blamed on cosmological processes.

“Nobody knows the origins of global climate change,” Putin told reporters at the start of his marathon end-of-year news conference.

“We know that in the history of our Earth there have been periods of warming and cooling and it could depend on processes in the universe,” he added.

“A small angle in the axis in the rotation of the Earth or its orbit around the Sun could push the planet into serious climate changes,” he argued.

But Putin acknowledged that climate change was a major issue, saying we “must undertake maximum efforts to ensure that the climate does not change dramatically.”

Speaking as Moscow is seeing unseasonably warm weather for December, Putin said that the rate of warming for Russia was 2.5 percent higher than elsewhere on the planet.

“For our country, this process is very serious,” he said. “We will undertake efforts to minimize the consequences for our country,” Putin said.

He insisted Russia’s emissions were far lower than those of major Western countries and that it stood by its obligations under the Paris climate accord.

He said climate change was a particular risk for Russian regions where buildings are built into permafrost and there “could be very big consequences if it melts”.

A weather station in the north of Moscow recorded a temperature of 5.4 degrees Celsius (41.7 Fahrenheit) on Wednesday, the warmest seen in December in over a century.