Who is Judge Jocelyn Solis-Reyes?

She has been criticized for the slow disposition of the case, but the task given to her was huge, with 101 accused — 15 of which belong to a powerful clan in Mindanao — and 58 victims, not to mention that the eyes of the international community are focused on her.

After the case has been submitted for decision, case records have reached 238 volumes, — 165 volumes of records on the trial, 65 records of stenographic notes and 8 records containing the prosecution’s documentary evidence and testimonies of 357 witnesses. 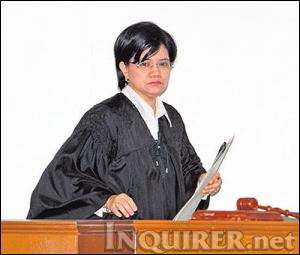 She has and she sifted through all these records to make sure that justice will be served on judgment day.

Originally, it was Quezon City Regional Trial Court Judge Luisito Cortez who was supposed to handle the case,  but he inhibited himself, citing fear for his life and his family’s safety.

After then Chief Justice Reynato Puno personally facilitated the re-raffle of the case, it landed on the sala of Solis-Reyes.

Aspiring for a job in the broadcast industry, she took up journalism at the Lyceum of the Philippines. However, she followed what her mother has wanted — for her to study law. So she took up law at the University of Santo Tomas and passed the bar in 1987 with a score of 80.80%.

She started her career in the government as a public attorney, a post she held from 1992 to 1995.

Then, from 1995 to 2000, she worked as a public prosecutor until her appointment as presiding judge of municipal trial courts in Angeles, Pampanga and Zambales for two years.

Solis-Reyes has been aspiring for a promotion. In 2013, she was eyeing a Court of Appeals vacancy, but then Chief Justice Maria Lourdes Sereno prevailed over her and she agreed to see the massacre case to its end.