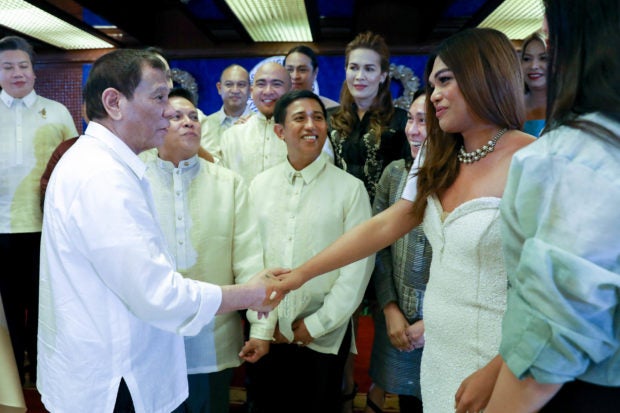 President Rodrigo Roa Duterte greets a member of the LGBT Pilipinas, Inc. during the thanksgiving gathering he hosted at the Malacañan Palace on December 17 ,2019. KARL NORMAN ALONZO/PRESIDENTIAL PHOTO

Duterte welcomed members of the LGBT Pilipinas, Inc. , and administered the oath of office of its national officers.

The group was led by Gretchen Diez, the transgender woman who earlier figured in a controversy after she tried to enter a female toilet at a mall in Quezon City. 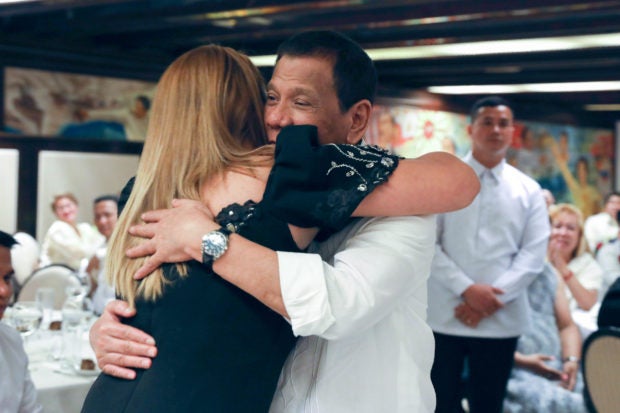 President Rodrigo Roa Duterte embraces a member of the LGBT Pilipinas, Inc. during the thanksgiving party he hosted at the Malacañan Palace on December 17, 2019. KARL NORMAN ALONZO/PRESIDENTIAL PHOTO

In his public speeches, Duterte has made conflicting remarks about members of the LGBT community.

In a campaign rally in April this year, the President said members of the LGBT community have nothing to be ashamed of as they too are created by God.

He even said in 2017 that he was in favor of same-sex marriage.

But in a speech before the Filipino community in Tokyo, Japan in May this year, he implied that being gay is a disease that needs to be cured.

Malacañang had earlier said that Duterte would support an anti-discrimination bill but not the Sexual Orientation and Gender Identity Expression (SOGIE) Equality bill, which is pending in the Senate.