As Boeing prepares to shutter much of a huge factory near Seattle that builds the grounded 737 Max jet, the economic hit is reverberating across the United States in places such as Wichita, Kansas, Stamford, Connecticut, and Cincinnati. 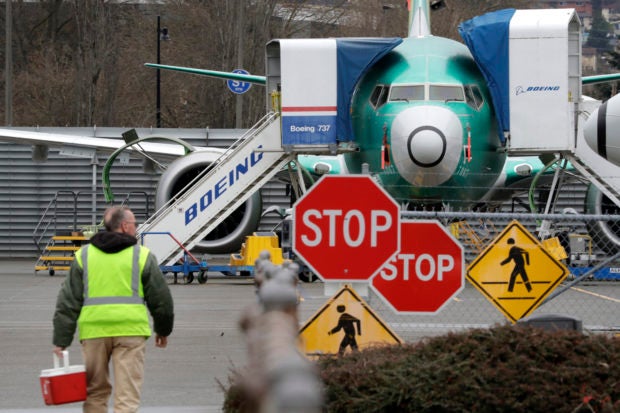 A Boeing worker walks in view of a 737 MAX jet Monday, Dec. 16, 2019, in Renton, Wash. Shares of Boeing fell before the opening bell on a report that the company may cut production of its troubled 737 MAX or even end production all together. (AP Photo/Elaine Thompson)

Those cities are home to some of 900 companies worldwide that supply parts for the troubled plane, which analysts say is the largest manufactured product exported from the U.S.

Boeing does not currently plan to lay off any of the 12,000 workers at its factory in Renton, Washington. But smaller parts companies like Wichita-based Spirit AeroSystems might not have that luxury. They could be forced to cut employees and might still get pushed out of business.

With 13,500 workers, Spirit is the largest employer in Kansas’ biggest city. It gets half of its revenue from making fuselages for the 737.

Even though the Max production had slowed, Spirit and other suppliers had continued to crank out parts, putting many of them in storage. As of Friday, Spirit had 90 fuselages on a ramp adjacent to nearby McConnell Air Force Base.

The Max was grounded worldwide in March after the second of two deadly crashes in Indonesia and Ethiopia that killed a total of 346 people. For months, Boeing used the parts to build about 400 Max planes that it could not deliver to airlines.

On Monday, the aerospace company announced that it would halt Max production in January with no date for it to resume, a realization that regulators will not clear the plane for takeoff anytime soon.

Getting the jet back in the air depends largely on the Federal Aviation Administration, which is evaluating Boeing’s effort to fix flight-control software that was a major factor in the crashes. Investigators have found that software designed to stop an aerodynamic stall was a huge problem for pilots, and Boeing is updating the code to make it less aggressive.

The FAA will not give a date for when the Max can return to the skies, and last week the agency said Boeing had an unrealistic expectations for putting the plane back into service. New FAA Administrator Stephen Dickson has said the decision will be on the agency’s timetable, not Boeing’s, indicating that it will take longer than Boeing had expected.

The Cincinnati-based company said Tuesday it’s working with customers and other suppliers “to mitigate the impact of the temporary shutdown of the 737 Max production.”

The company, which has more the 80 manufacturing sites worldwide with about 50,000 workers, said it can move people and manufacturing across multiple engine programs. That may hold off any layoffs. CFM produces other engines for commercial and military aircraft.

Stamford-based Hexcel, which makes composite materials used on the 737 Max frame and engines, already was reporting lower sales after Boeing slowed the rate of Max production. On Tuesday, the company tried to sound hopeful, saying it’s confident in the airplane’s long-term success and looks forward “to its return to flight and gradual ramp-up in production during 2020.”

The 737 Max is such a big product that by itself, the production hiatus will shrink the U.S. gross domestic product by around 0.5% in the first three months of 2020, predicted JP Morgan Economist Michael Feroli.

That could cut the U.S. economy’s growth rate by a roughly a quarter, to 1.5%.

Joseph Brusuelas, chief economist for RSM, a tax advisory and consulting firm, predicted layoffs by suppliers and wrote in a note that some may have trouble staying in business. At an event his firm hosted in Wichita last summer, one executive from a midsize company indicated that if the Max grounding turned into a production halt, “it would be an existential risk” to that firm.

“It cannot be overstated just how important the domestic and global supply chains associated with Boeing are to the small- and medium-sized firms,” Brusuelas wrote.

If parts supply companies stop production, it will be difficult for them to quickly restart their factories, and that could further delay any startup of Boeing’s assembly lines.

Spirit AeroSystems CEO Tom Gentile said in October during the Kansas Economic Outlook Conference that it would take a long time to come back if production were reduced.

Boeing’s situation is so important that it has been discussed at the White House, top presidential adviser Kellyanne Conway said Monday.

The ripple effects of the Max grounding already have hit airlines, which have been forced to delay putting the Max into their flight schedules. That has cut the number of available seats, pushing prices up. But analysts say it also has stopped airlines from adding routes and expanding.

Southwest Airlines, which was counting on the Max to update its fleet, pushed back any hope of restoring the plane to service by five weeks, to April. American Airlines did the same last week. United, which already pulled the Max from its schedules through March 4, said it will keep monitoring the process to determine when the aircraft can safely fly again.

Read Next
Americans steadfastly divided over Trump impeachment as vote nears
EDITORS' PICK
Nograles: Cabinet members to donate 75% of monthly salary to aid COVID-19 fight
Robredo spox thanks Duterte for defending VP’s efforts vs COVID-19
Diokno to Duterte: OK to make fun of buck tooth, but focus on people’s needs first
10 Filipinos positive for COVID-19 in UK, 7 in Ireland — envoy
Quick chat with Nicole Andersson: ‘You really don’t need much to be happy’
IATF to LGUs: Issue ordinances vs attacks on frontliners, COVID-19 patients
MOST READ
Coronavirus hotbed Rizal to shut borders on April 6
Sotto on Isko Moreno’s call: We do our job without the media following our every move
Gov’t mulling quarantine period extension of 15-20 more days
ADB warns PH against prolonged lockdown
Don't miss out on the latest news and information.