WASHINGTON  – As the U.S. House of Representatives prepares to take a historic vote on the impeachment of President Donald Trump, the American public is following along, steadfast in its views. 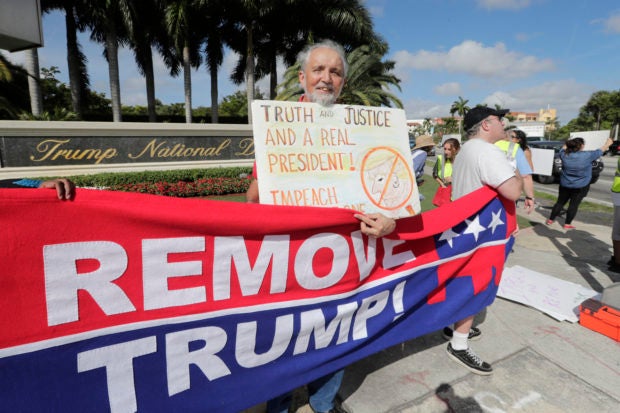 Ray Bonachea holds a sign in favor of the impeachment of President Donald Trump, outside of the Trump National Doral Miami golf resort, Tuesday, Dec. 17, 2019, in Doral, Fla. The House of Representatives is expected to vote Wednesday on articles of impeachment. (AP Photo/Lynne Sladky)

Many polls since House Speaker Nancy Pelosi announced the start of an impeachment inquiry on Sept. 24 show that Americans are closely divided over whether Trump should be removed from office. Heated public hearings on network television that reached millions of Americans alongside a White House on the defensive have done little to move public opinion on the issue.

And there’s little sign that the inquiry has had any impact on Trump himself, whose approval rating has not strayed from the range it’s been throughout his presidency.

The impeachment articles accuse Trump of abuse of power and obstruction of Congress. The House has spent weeks investigating whether the president violated his oath of office by asking the government of Ukraine to investigate his political opponent.

CONSISTENT (AND POLARIZED) VIEWS OF TRUMP

Approval of Trump’s overall performance has largely held steady, even as the impeachment proceedings have carried on. A new AP-NORC Center for Public Affairs Research poll has Trump’s approval rating standing at 40%, about where it’s been over the last several months and through most of his presidency.

New polls from The Washington Post/ABC News and CNN find support for impeachment and removal remains at about half of Americans.

Support for removing the president saw a one-time increase in the wake of Pelosi’s September announcement of an official inquiry. Earlier this year, polls showed a majority opposed to impeachment.

Both polls find less than half of Americans approving of how either congressional Democrats or Republicans — or Trump — have handled the inquiry.

Still, the Post/ABC poll finds that a slim majority of Americans, 55%, think the hearings in House committees have been fair to the president.

Today’s presidential impeachment inquiry is only the fourth in U.S. history, and polling demonstrates how public opinion fluctuated — or didn’t — as impeachment proceedings progressed.

Approval of President Bill Clinton actually ticked up immediately after the House vote to impeach him in December 1998. Though a short-lived bump, Clinton did emerge largely unscathed from the proceedings over his handling of allegations of his extramarital affair with Monica Lewinsky, a White House intern. Views of his impeachment were fairly negative throughout 1998 and 1999, with support for his removal reaching no more than about a third of Americans, including just before the House voted to approve two articles of impeachment. In the midst of the investigation, Democrats even picked up seats in the 1998 midterm election, though they went on to lose the 2000 presidential election.

By comparison, approval ratings for President Richard Nixon took a severe hit as the public learned more about his transgressions, according to Gallup polling. Over the same time, support for impeachment steadily grew. Even so, it wasn’t until late July 1974, after the House Judiciary Committee approved articles of impeachment to send on to the House for vote, that more than half supported Nixon’s removal from office.

The House vote on Wednesday is expected to fall along partisan lines, with nearly all Democrats planning to approve the charges against Trump, which would advance the case to the Senate for trial.

Just as he did during the House committee hearings, Trump has told officials not to appear, and Senate Majority Leader Mitch McConnell similarly rejected Democrats’ plea for witness testimony during the Senate trial.

Before McConnell’s announcement, the Post-ABC poll showed a wide majority of Americans, 71%, saying Trump should allow his top aides to testify in a Senate trial.

Nearly 6 in 10 also said they were confident that Trump would receive a fair trial in the Senate.