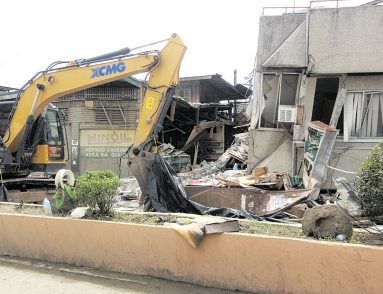 DESTRUCTION Only the third floor remains of the three-story Southern Trade commercial building in Padada town, Davao del Sur, after it collapsed when a 6.9-magnitude quake hit the province on Sunday. —ELDIE AGUIRRE

PADADA, Davao del Sur, Philippines — Authorities on Tuesday ended the search and rescue operations at the collapsed three-story Southern Trade building here, and proceeded with retrieval operations, after detecting no sign of life among the rubble.

The area around the Southern Trade, also known to residents as South Green Commercial, had been sealed off as a huge backhoe started its work on the building.

Only the top floor remained visible after portions of the first and second floors collapsed at the height of the 6.9-magnitude earthquake, the strongest to have hit this part of Mindanao, at 2:12 p.m. on Sunday.

Capt. Arnold Absin, the town police chief, said they were going to drill a hole that would reach the first and second floors of the building to retrieve whatever bodies they would find.

From the street that linked to what used to be the bus terminal here, only the roof deck and the third floor of the building can be seen. But the part where the backhoe and other equipment drilled through the building had been blocked from view.

Absin also corrected reports that Emily Gallegos, whose body was recovered late Monday, had texted her friend at 4 a.m. on Monday that she was trapped with six other people inside the building.

Gallegos’ body was found under the debris near the entrance of the building. It was the third to have been removed from the area.

Four other people died in the temblor that struck Davao del Sur.

Gallegos’ coworker, who talked to her minutes before the quake, said it was not possible for her to have a mobile phone or to look for one inside the collapsed building because all their phones were in an area which was not accessible to them at that time.

“No one among us were allowed to bring phones while we were at work,” Quinvir Mae Guyot told the Inquirer.

In Matanao town, which is near the epicenter of the quake, Mayor Vincent Fernandez ordered a forced evacuation in Barangay Asinan, where large cracks had been found.

The local government advised residents to evacuate to the nearby Barangay Bangkal, about 3 kilometers away.

Rodrigo Gador, the father of Chelben Chen, 6, who died after she was hit by falling debris in their house, was still traumatized by the quake.

He said he was able to grab his son as they ran outside the house before it collapsed.

A total of 104 people were injured while 5,600 families, whose homes were damaged, sought refuge in evacuation centers. Others set up tents outside their homes.

Water supply had been cut and electricity service in some areas had yet to be restored.

In Kidapawan City, at least 17 houses collapsed in Barangay Lepaga, forcing 60 people to sleep in tents. The village’s chapel was also damaged.—With a report from Williamor Magbanua