Finding the fault that moved 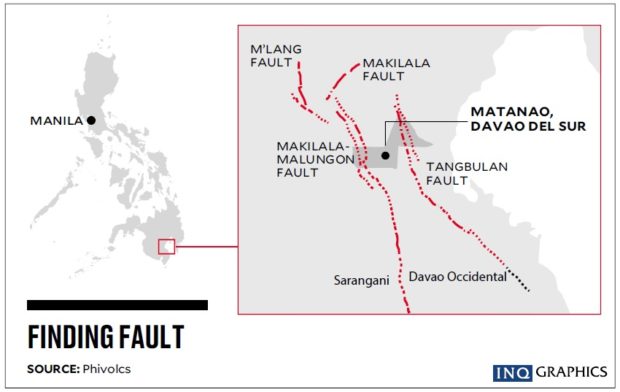 Now geologists are looking at the Tangbulan Fault as the possible generator of the 6.9-magnitude earthquake that shook Davao del Sur province and a large part of Mindanao on Sunday.

Science Undersecretary Renato Solidum, the officer in charge of the Philippine Institute of Volcanology and Seismology (Phivolcs), described the Tangbulan Fault as running parallel to the east of the Makilala-Malungon Fault, the longest fracture within the Cotabato fault system that includes the Mlang and the Makilala faults.

As it is similar in length to the Makilala-Malungon Fault, the Tangbulan Fault can also generate a 7.2-magnitude earthquake.

During the series of quakes that struck Cotabato province in October, geologists closely watched the Makilala-Malungon Fault because of its proximity to the two faults that had moved and because of its capacity to generate a 7.2-magnitude temblor.

In a phone interview on Monday, Solidum said that after the 6.9-magnitude quake on Sunday, he would not discount the possibility of a much stronger earthquake occurring in Tangbulan, although the chances of a bigger quake to occur within this fault would be low after the release of that much energy.

“The faults are stressed, that’s why. It’s not surprising that they move,” he said.

Once energy has been released, a period of rest follows, he added.

“We expected it to move but not this fast,” he said, but added that Phivolcs had been more prepared because geologists were already at the site the day after the earthquake.

The Tangbulan Fault, Perez said, runs somewhere near Bansalan town through Matanao, Hagonoy and Padada down to Sulop and Malalag in Davao del Sur, and Santa Maria in Davao Occidental.

Perez said that the lower magnitude of the quake—referring to the 6.9-magnitude against the maximum 7.2 magnitude—meant that only a portion of the fault had moved and Phivolcs had yet to find out which.

“Not the entire stretch had moved but we still had to find out which portion of the fault moved,” he told the Inquirer.

Perez, who flew in to Davao City on Monday, joined the Office of Civil Defense in an aerial survey of the quake-stricken sites to check the ground for ruptures and to survey the damage from the air.

Read Next
Drilon: House push on Cha-cha doomed
EDITORS' PICK
Do all the things you do, faster
Motorcycles, smartphones, and cash prizes up for grabs in TNT’s ‘Tuloy Ang Saya’ Raffle in Mindanao
House energy committee chair Arroyo bats for cheap electricity
NCR at increased COVID risk again
New PS-DBM director says DepEd laptop MOA ‘not legal’
House okays budget; ways to go in Senate
MOST READ
Shopee PH gets flak for getting Toni Gonzaga
Robredo’s tarpaulin portrait at Palace just a ‘placeholder’
Robredo supporter tackles elephant in room: No massive fraud in 2022 polls, surveys were just right
DepEd: We are in a crisis situation in education sector
Don't miss out on the latest news and information.