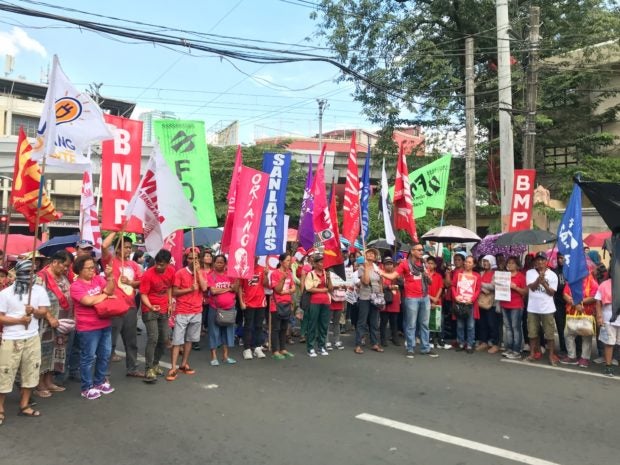 ALL WE WANT FOR CHRISTMAS IS NO COAL. Climate and environmental advocates, including faith-based organizations, labor, youth, women and consumer groups marched to Mendiola on Monday demanding an end to all coal contracts in the country’s energy mix in favor of cheaper, cleaner renewable energy sources.

MANILA — Climate and environmental advocates, faith-based organizations, labor groups, youth, women’s groups, and power consumers marched to Mendiola on Monday to demand the best gift the current administration and energy stakeholders can present to Filipinos this season of giving: the rejection of dirty, deadly, and costly energy from coal.

Dubbed as “Caroling ng Mamamayan,” the multisectoral action is the culmination of a two-week Christmas-themed series of activities led by the Power for People Coalition (P4P), a broad network of clean energy advocates from across the Philippines, decrying coal’s continued dominance in the country’s energy mix.

“These past weeks, Filipinos from all walks of life knocked on different corporate and government bodies to hold them accountable for enabling coal power to heavily burden Filipinos with its costly price and the detrimental impacts it brings to the environment and its host communities. We are here in hopes that the unified cry of Filipinos would ultimately reach the seemingly deaf ears of government, financial institutions and corporate proponents who contributed to the proliferation of coal,” said Gerry Arances, Convenor of P4P.

“Instead of focusing on clean energy sources as the President himself mandated in his SONA 2019 speech, they are drowning our people deeper into a sea of troubles,” he added.

The group said the government must follow the President and review existing policies in the energy sector, which enabled the dominance of destructive and expensive electricity from coal at the cost of consumers’ welfare.

“The Energy and Power Industry Reform Act (EPIRA) promised back in 2000 that allowing private corporations to take charge of the country’s energy facilities would not only yield cuts in government spending, but also produce the least-cost electricity for consumers by encouraging competition among providers. Two decades should be more than enough time to realize that when a public necessity is entrusted to private entities and they get to play by their own rules, service turns into business,” said Atty. Aaron Pedrosa, Secretary General of multisectoral group Sanlakas

According to the group, new coal agreements would also force Filipinos to pay in other ways – not just with their money, but with their safety and survival.

“Based on the report released by IPCC late last year, there is no time left to avert even more catastrophic climate change. This is the time when we must be radically changing the way we power society. Emissions must be cut down at the rate required by the Paris Agreement goal of 1.5°C, and that means a reduction of 78 percent of global coal-based energy production by 2030,” said Pedrosa, who is also the Co-Chair of the Energy Working Group of the Philippine Movement for Climate Justice.

“In July, the President’s marching orders for the development of renewable energy sources was a cause for joy to coal-affected communities, power consumers, and clean energy advocates across the country. Half a year later, and with barely any evidence of compliance from the energy secretary whom he specifically addressed to carry out the reduction of our country’s coal dependence, we ask the President to give us another reason to be glad this holiday season. It is high time for him to give teeth to his renewable energy pronouncement by issuing an executive order to end coal. It is high time, too, to initiate the overhauling of EPIRA to give way to legislation that levels the playing field for renewables,” he said.

Arances, who is also the Executive Director of the Center for Energy, Ecology, and Development, said that at present, “Meralco is doing its very best to gain the Energy Regulatory Commission’s approval of five new coal and other fossil fuel contracts. This, despite three consecutive rate hikes in the last quarter of the year, and despite over sixty red and yellow alerts in the Luzon grid in 2019 alone which were mostly caused by outages of the coal-fired power plants from which Meralco is taking its electricity supply.”

“As the Philippines is among the countries in the world most vulnerable to climate disasters, all corporations, financial institutions, and government bodies within or outside our shores still insisting on the use of coal are obstructions to our path to survival, and to a future powered by clean energy,” he added.